Audi's R8-based electric supercar gets go ahead, according to firm's US boss 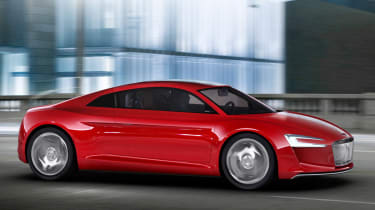 Audi’s amazing E-tron looks set to make it to production.

The R8-based electric supercar concept was unveiled at September’s Frankfurt motor show, with striking looks and some eye-grabbing numbers – maximum power and torque outputs of 313bhp and 3319lb ft, the latter being ten times more than that of a petrol V8-engined Audi R8.

And now it appears there’ll be a road going version, with Audi of America’s president, Johan de Nysschen, being quoted as saying ‘I expect we will see running examples in the next 24 months.’

How close a production version would be to the concept remains to be seen, but we look forward to finding out. Gen up on the Audi E-tron here.Read our drive of Audi’s R8 V12 diesel concept hereFollow evo on Twitter for the performance car latest