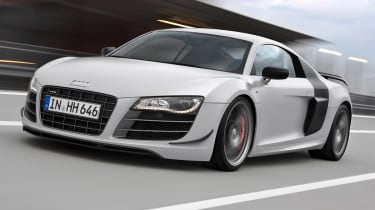 Audi has – at long last – revealed its hardcore R8 supercar. Tougher R8s have been spotted in testing for sometime, with all sorts of rumours about Clubsport names and rear-wheel drive. Neither are true. The Audi R8 GT retains the Quattro all-wheel-drive system of its V10 donor car, though with a 15/85 front/rear power distribution, and the standard R8’s penchant for sliding, that’s perhaps not as disappointing as it may sound. The GT’s main focus is on more power and less weight. The 5.2-litre V10’s output is upped to 552bhp and 398lb ft. Essentially the same unit as the Lamborghini Gallardo LP560-4, then.  It’ll hustle the 1525kg GT to 62mph in 3.6sec and 124mph in 10.8sec; top speed is 199mph. Audi’s six-speed R tronic sequential manual gearbox is standard. That kerb weight is 100kg less than a standard Audi R8 V10, those savings the result of some obsessive work in all areas of the car. The windscreen is made of thinner glass, the rear windows are polycarbonate, the carbon rear wing is fixed rather than adjustable, and the rear bumper, rear hatch and the sideblades are all made of carbonfibre reinforced plastic. There are even thinner carpets, which cut 8kg. The GT boasts more downforce than a regular R8, despite achieving the same slippery 0.36Cd drag coefficient. Carbon ceramic brakes are fitted as standard, and come shrouded in 19in forged alloy wheels. You can specify ‘Cup’ tyres, as well as an excellent-sounding Race Package. This consists of a type-approval roll cage, four-point seatbelts and a kill switch and fire extinguisher. It’s no coincidence that the ESP also boasts a special tune, and can be completely deactivated… The R8 GT will cost 193,000 euros in Europe, but thanks to lower pricing in the UK, expect to pay £140-150,000 for one on our shores. That will help it undercut its closer-than-ever cousin at Lamborghini. There is a rear-drive Audi R8 – read about it here Catch up on all our exploits in our R8 long termer