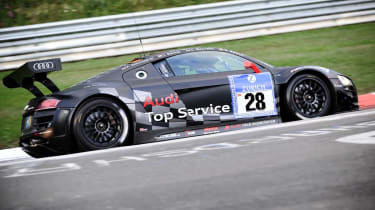 ‘Apparently, there is a car on fire in the Foxhole…’ Not what I wanted to hear over the radio as I headed out of the pits for my night stint in the 525bhp Audi R8 LMS. It was there alright, now a smoking wreck attended by a fire engine. The very next marshals’ post showed a green board and we were racing again (mindful that the slicks had just been through water and foam). Only at the Nurburgring.  There seemed to be a big accident every other lap but the show went on, and so did our R8, number 28. And on and on and on. This was the strategy of the Audi Race Experience team; we had exactly the same car as the works Abt and Phoenix teams but we wanted to run long, to use less revs and eek out the fuel for nine laps per stint, and to stay out of trouble.  If I’m honest, I wondered if I was up to the job. Like Christian Bollrath and Rudi Speich, the other customers in No28, I hadn’t driven the R8 on the Ring until Thursday practice. We all emerged shocked by its directness at speed. ‘It’s a racy car,’ Manfred Jantke, our legendary manager, told us. Translation: ‘man up’. And we all did.  Halfway through the third stint I heard the best line of the weekend over the radio: ‘Johnny-boy, welcome to the top 20…’ By the time I took my last stint, I was utterly exhausted but the R8 was my friend and we were still in the top 20, along with Chris Harris’s 911. I handed over to our pro driver, Frank Schmickler, with just a couple of hours to go, and he drove a great extended stint to the flag.  Our objective had been to keep going, to make no unscheduled stops, and we did. Which is how one pro driver and three blokes came home 18th overall in the greatest motor race in the world*.  *That’s not just my opinion: ex-F1 driver Mark Blundell, tackling the race for the first time, reckoned N24 was more challenging than any other 24-hour race he’s done, be it Le Mans, Spa or Daytona.   Fancy tackling the 2012 Nurburgring 24-hours in an Audi R8 LMS? Details available from Audi Race Experience: P +49 841 89 32900E incentive@audi.deW www.audi.de/driving  Costs:Race training/prep, Groß Dölln 2900euro4/6-hour VLN race, 10,000euro24-hour race, 19,500euro