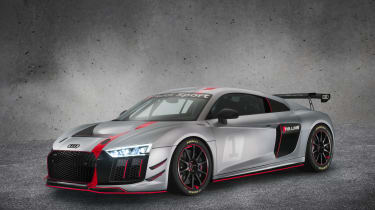 Audi Sport continues to expand its racing portfolio, and this R8 LMS GT4 is the latest addition to its growing range. It makes its static debut at the 2017 New York auto show.

The production-based racer is directly derived from the road-going Audi R8 V10, and is aimed primarily at amateur (albeit presumably fairly well-heeled) competitors. They'll have plenty of places to race it - Audi points out that there are 13 series worldwide in which GT4-class cars can compete.

Audi's last GT4 model was based on the previous-generation TT, but the class has grown consistently over the past few years and R8 LMS GT4 competitors will be racing against cars as diverse as the Porsche Cayman PRO4 GT4, Chevrolet Camaro and KTM X-Bow.

The R8 shares more than 60 per cent of its components with the road car, and is produced at the same Böllinger Höfe facility in Neckarsulm, north of Stuttgart. As such, it shares the road car's "Audi Space Frame" chassis (albeit equipped with a steel roll cage) and 5.2-litre V10. 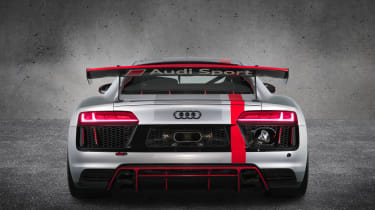 Power here is 488bhp, which is actually less than the road car's 533bhp motor, though this is subject to change depending on the series' balance of performance tweaks. The engine runs a dry sump and supplies power to the rear wheels alone (instead of the standard four) through a seven-speed dual-clutch transmission and limited-slip differential.

Weight too is dependant on regulations, though the R8 LMS GT4 comes in at 1460kg dry. The race car uses steel brakes, rather than carbon-ceramics, and packs a 118-litre fuel cell to prepare it for long-distance racing. And performance? Audi Sport quotes 0-62mph in under four seconds, and a conservative top speed of "over 155mph".

Naturally, Audi Sport can also provide racers with a comprehensive servicing, spare parts and logistics package, just as it does on its GT3-level race cars. Teams will no doubt make use of that when the car makes its first racing appearance at the upcoming Nürburgring 24 Hours, which takes place from May 25 to 28.