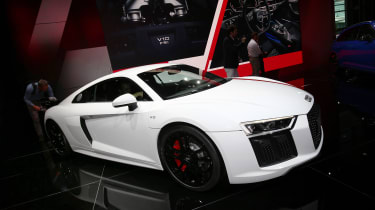 Stephen Winkelmann, lead man of Audi Sport is not your normal automotive executive, so to see him instigating significant changes should come as no surprise. Braving the wrath of Audi enthusiasts, he changed the Audi performance sub-brand name from (the legendary) quattro GmbH to Audi Sport – “It tells people more of what we can and what we do here. Audi Sport is not just about four-wheel drive road cars,” he told evo last year. This change in ethos was evidenced in more than name with the introduction of the the rear-wheel drive Audi R8 RWS (Rear Wheel Series) announced at the Frankfurt motor show, of which 999 examples will be built in both coupe or spyder formats.

Starting with the base R8 V10 533bhp model, the RWS diet regime sees the propshaft, multi-plate clutch and centre differential ditched, with drive sent solely to the rear axle through the same seven-speed twin-clutch S-tronic box. The torque output also remains the same as the quattro equivalent at 398lb ft. Dropping all the four-wheel drive peripherals has resulted in a 50kg weight drop for the coupe and 40kg for the spyder, but the 0-62mph dash has suffered slightly, now 3.7 and 3.8sec respectively. Both models top out just shy of 200mph. 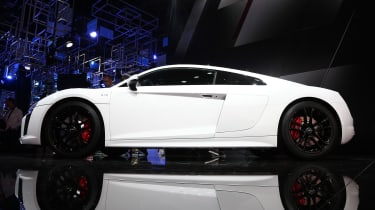 The weight saving was significant enough to require Audi Sport engineers to recalibrate the dampers to account for lighter load and the rearward centre of mass shift. The (standard) electromechanical power steering has also been revised (as has the optional Dynamic steering) with Audi now claiming it’s torque steer free. The 19-inch wheels house cast-iron stoppers (carbon ceramics are an option); the rears are shod in a wider section 295 tyre compared to 235 section items upfront.

Determining the R8 RWS cars from their four-wheel drive counterparts will need a keen eye. A matt black grille on the nose with flanking air apertures are the distinguishing features, while the matt theme also extends to the rear air outlets, too. The coupe’s upper side blade is finished in gloss black, too, the lower in body colour. As with the R8 LMS GT4 limited edition the RWS coupe is also available with a red stripe running over the bonnet, roof and rear end. Sports seats are standard and finished with a combination of leather and Alcantara, with bucket seats an option. And for those wishing to be reminded of their R8’s rear-wheel drive credentials, there’s a numbered plaque inside.

Orders are being taken now with the first deliveries expected later this year.