Audi RS3: Details and pictures on the hottest new hatch 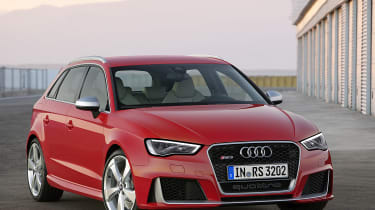 Audi is clearly serious about its new RS3 Sportback. Not only does the model retain a five-cylinder engine – a layout that following the last model, Audi didn’t plan to revive – but it also beats Mercedes’ indecently quick A45 AMG in terms of maximum output.

With 2480cc and a turbocharger at its disposal, Audi has extracted 362bhp from its five-pot unit. By comparison, the A45 AMG produces 355bhp, albeit from a smaller 2-litre unit.

The RS3 Sportback also puts 343lb ft of torque through its quattro all-wheel drive system, enabling a 4.3sec 0-62mph dash and 155mph top speed. Owners wishing for more can ask their dealer to remove the limiter, sending the five-door hatch to 174mph.

A full Audi RS exhaust system provides the soundtrack. Twin flaps downstream of the silencer control exhaust flow to enhance the RS3’s aural qualities, though again Audi offers an upgrade – a full sports system is optional for the greatest dose of five-pot warble.

Audi has tweaked its familiar seven-speed S tronic dual-clutch transmission for faster-than-ever shifts. A launch control system is standard, while Audi says the S tronic’s ratios have been optimised for low-end acceleration and top-end economy. Combined fuel consumption is 34.9mpg, with CO2 emissions of 189g/km.

This, combined with a quattro system set up to deliver up to 100 percent of the engine’s torque to the rear wheels, torque vectoring, and a dedicated sport ESC setting, promises greater adjustability than some previous Audi RS products.

Exterior styling follows the usual RS cues with silver detailing, deeper front and rear bumper sections and a honeycomb grille element, while interior trim is embellished with an Alcantara-trimmed flat-bottomed wheel and carbonfibre inserts in the dashboard.

Audi hasn’t yet revealed UK pricing for the RS3 Sportback, nor has it announced an on-sale date. 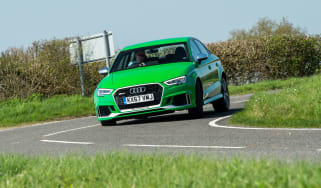 2019 Audi RS3 review – no longer the hottest of hatchbacks