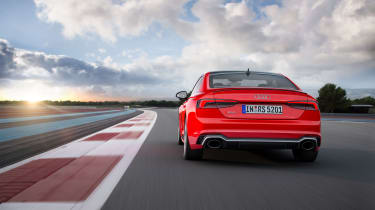 The new, bolder-looking, faster and more powerful Audi RS5 is set to hit our shores this summer. It will cost £62,900 and orders will be taken later this month.

The new RS5 harbours a twin-turbocharged, 2.9-litre V6 that’s two cylinders down and lesser in size than the engine it replaces, but despite this significant performance gains have been made. The newly-developed engine is boosted by a pair of turbochargers in a ‘hot V’ arrangement to 444bhp and 443lb ft of torque. Not only is the latter figure developed from 1900rpm all the way to 5000rpm, but it's a significant 125lb ft more than the old RS5 developed, itself no slouch. Torque is sent to all four wheels through an eight-speed Tiptronic automatic transmission. The result is a 3.9-second 0-62mph time, and a top speed of 174mph for cars with the optional dynamic package.

Combustion trickery – using a shorter compression stroke relative to the power stroke, has increased efficiency by a claimed 17 per cent to 32.5mpg combined, with 197g/km of CO2. Possibly not quite enough to appease Greenpeace, but potentially enough to make a difference to the average owner's fuel bills.

More importantly though, Audi has engineered the RS5 to be a more engaging drivers’ car than its predecessor. Firstly, it’s now 60kg lighter than the old RS5. Also, its famous quattro four-wheel drive system now automatically sends 60 per cent of its torque to the rear axle, while the locking sport differential, which was an option before, now comes as standard for the UK market. This differential balances the torque across the rear axle to improve the car’s agility and increase its adjustability. Although we don’t expect the RS5 to be an oversteer machine in the manner of an M4 we have noticed a subtle changing of the balance of recent fast Audis, so promises of actual adjustability are far from a fantasy. 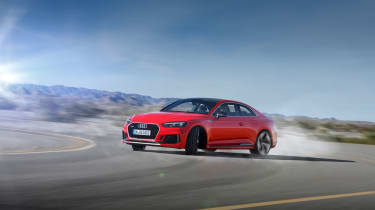 Adaptive suspension and carbon ceramic brakes remain optional, as does Audi’s dynamic steering, thankfully. It isn’t a system we’ve ever really bonded with, but the RS5’s optional steering has been tuned specifically for the car so could prove to be much better.

Audi designers donned a pair of rose-tinted specs when penning the body of the new RS5. Integrating design cues from the famous race car, the Audi Quattro IMSA GTO, the new coupe’s debut represents more than just a new model, but the future design direction of forthcoming Audi Sport models.

Stood next to the previous RS5 it's clear to see designers have tried to impart more drama and verve on the new coupe with visible hints of the IMSA influence — the reserved look has been displaced by an altogether angrier and pointier appearance. This approach is highlighted by a deeper set and more angular front bumper fitted with honeycomb air intakes. 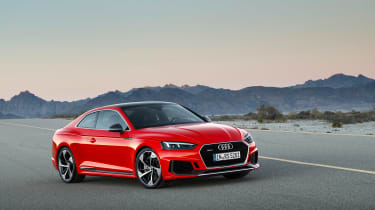 Sitting either side of the sloped bonnet are sleek LED headlamps, that bleed back towards the wheel arches which have been stretched widthways, protruding 15mm further than the standard A5.  This adds to the drama, even if it doesn't quite match the jaw-dropping, super-blistered arches of the IMSA Audi 90.

At the rear there's a wide diffuser element, housing a pair of oval tailpipes. In contrast to the larger arch blisters, Audi has fitted possibly the world's tiniest lip spoiler to the bootlid. The wheels however are suitably large, with 19-inch items as standard and 20-inch alloy wheels as an option. A choice of appearance packages, including carbon, matt aluminium and gloss black details, can further enhance the car's look, as does an optional carbonfibre roof. 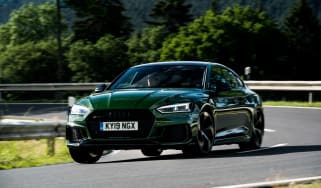