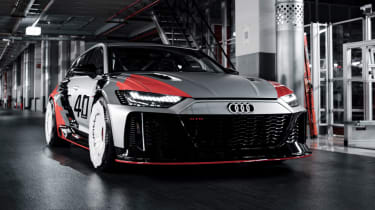 Audi has had a longstanding history both on and off the tarmac and one of its most notable, if short-lived, creations was the wild 90 quattro IMSA-GTO. To pay homage to the ‘80s racing car icon, 12 of Audi’s apprentices took on the task of building a modern-day homage using the current C8 RS6 as a basis.

The RS6 GTO has seen a complete transformation both inside and out, with extensive use of 3D-printing to create a variety of bespoke parts featured on the concept. Its bold retro livery and those spectacular turbofan wheels inspired by the racer’s BBS Airblades are clear nods to the original racer, but the RS6’s changes go deeper than that.

To begin, the bodywork is bespoke to the concept, with new front wings that terminate at the front door with a large slip vent referencing the racer. At the rear an enlarged roof-mounted and contrasting gloss black insert on the tailgate do the same, the latter having last been applied on the limited-run A1 Quattro. The new rear diffuser features an aggressive rain light, but ditches the exhaust tips which have been rerouted to outlets ahead of the rear wheels. 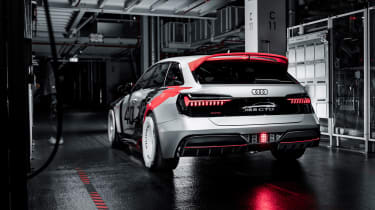 The new front bumper has a wider stance thanks to some reshaped lower intakes and the sectioning of Audi’s trademark single-frame grille. There are new vertical elements in the lower openings too, directing air into the engine’s substantial cooling package. There are new cooling vents fitted to the bonnet too, and the splitter is more pronounced than the road-going RS6 too.

The cabin has also received an overhaul, stripped of all unnecessary items for a reduction in weight, it features a full roll cage alongside a pair of carbonfibre Recaro bucket seats complete with Schroth racing harnesses. Even the centre console storage compartment has been repurposed as a custom control panel for lighting and other functions. 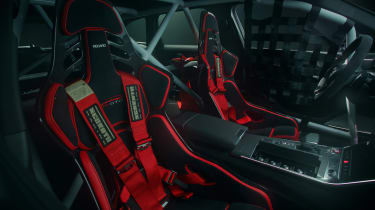 Performance for the RS6 GTO hasn’t been disclosed, however even a standard C8 RS6 boasts performance not dissimilar to the 1989 racer. The RS6 is powered by Audi’s 4-litre twin-turbocharged V8 that produces a healthy 592bhp and 590lb ft of torque, with its all-wheel drive system helping it reach 62mph in 3.6sec, no matter the weather. The IMSA-GTO in contrast featured a (heavily) turbocharged 2.2-litre five-cylinder for a 710bhp output, enough for a quoted 3.1sec 0-62mph time and 193mph top speed.

Though it only starred in a single 1989 season, it’s undoubtedly one of Audi’s most iconic racing cars, piloted by racing legends Hans-Joachim Stuck and Walter Röhrl. Sadly, the RS6 GTO isn’t something you’ll see on your local Audi forecourt any time soon, but should make its way to various events once normality resumes. 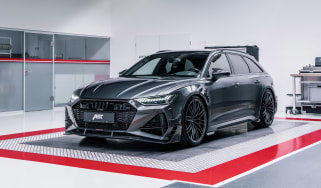