Audi RS6 and RS7 aim for 190mph with Performance kit 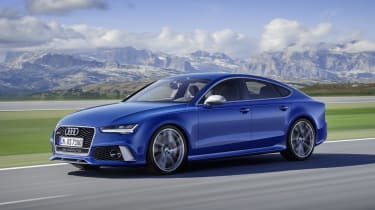 Audi has launched a new Performance model option for both the RS6 Avant and RS7 Sportback, lifting power to nearly 600bhp and top speed to 190mph.

The firm has leaned on the technical expertise of its Quattro GmbH division to hone the models’ twin-turbocharged, 4-litre V8 TFSI power units for greater power and torque than ever before.

Work to the engine management system, a higher rev limit and extra boost pressure raises maximum power to 597bhp and torque to 516lb ft, the former a significant gain over the standard 552bhp but the latter matching that of the regular RS6 and RS7.

That said, Performance trim also brings with it an overboost function, that raises twisting force to 553lb ft. The result of the extra underbonnet ability is a 0-62mph time of 3.7sec – 0.2sec quicker than standard – and a 0-124mph run of 12.1 seconds, knocking 1.4sec from the previous figure.

An optional dynamic package also lifts the top speed, from the usual electronically limited 155mph to either 174mph or a staggering 189.5mph.

In addition to the mechanical modifications, Quattro GmbH has also reworked the standard 8-speed tiptronic automatic for ‘extreme sportiness’. In its manual mode, the driver can view a shift indicator in either the driver information system or on the optional head-up display. Changes are made via the selector lever or, as ever, steering wheel-mounted shift paddles. 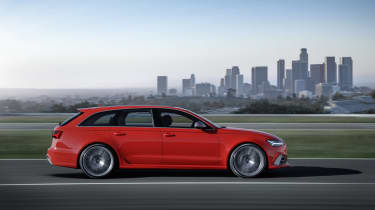 The Quattro system’s drive is split 40:60 front:rear in regular driving, redistributed between the axles as necessary depending on the immediate driving demands. A sport differential at the rear axle also helps direct torque between each of the rear wheels.

External accompaniment to the tweaked engine and drivetrain includes revised front and rear RS bumpers, with a large rear diffuser. Selected elements are daubed in a matt titanium-look finish, and set off by a new optional paint finish, Ascari blue metallic.

The interior is similarly upgraded, with standard RS sport seats, an optional black and blue seat trim combination, upholstered in a new Alcantara and leather combination with a honeycomb pattern. Carbon twill inlays can be found on selected surfaces, interwoven with blue thread.

UK pricing for the Performance models has not yet been revealed, but in Germany the RS6 Avant goes on sale at 117,000 euros and the RS7 Sportback at 121,700 euros.