The new Audi A3 Saloon range is topped by a 296bhp, all-wheel drive S3 version 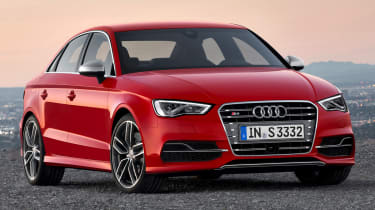 A year after the hatchback's debut, the Audi A3 Saloon has launched. And there will be a high-performance S3 model, too. The new Audi A3 Saloon is derived from the Sportback’s underpinnings, but rides 9mm lower. There are three four-cylinder engines from launch, all of them turbocharged; A base 1.4-litre TFSI petrol turbo delivers 138bhp/184 lb ft and boasts cylinder-deactivation tech while a 1.8-litre TFSI produces 178bhp/184lb ft and completes 0-62 in 7.3sec. The first diesel option, a 2-litre TDI, combines 148bhp and 236lb ft power figures with claimed 67.3mpg fuel economy.

The A3 Saloon is available with two gearboxes, depending on engine – a six-speed manual or twin-clutch S-tronic. The latter incorporates steering wheel-mounted paddle-shifters as well as a Sport mode allowing higher revs. The A3 Saloon measures 11mm wider than the Sportback, though with the 1.4 TFSI engine, Audi claims a 1205kg kerbweight – a product of the aluminium bonnet and an engine weighing just over 100kg.

Soon after the base model launches, Audi will introduce its sports iteration – the S3 Saloon. Under the bonnet is a turbocharged 2-litre four-cylinder petrol engine, producing 296bhp and 280lb ft and driving all four wheels through a Haldex system, which is still dubbed quattro. Coupled to the S-tronic automatic, the S3 will tick off 0-62mph in 4.9sec (or 5.3sec with the six-speed manual) before hitting its predictable 155mph electronic buffer. The S3 Saloon rides 25mm lower than the standard four-door and gains beefier bumpers, bigger air intakes, and front sports seats.  The announcement of the A3 and S3 Saloon launches Audi into the competitive compact saloon market and head on against German rival Mercedes-Benz, which recently released its A-class derived CLA. BMW is late to the party, still developing its 1-series based rival, potentially called the 2-series. Both the Audi and Merc offer similar returns of 60+mpg in diesel trim, but most entertaining will be the showdown between those high performance variations.

The Mercedes CLA45 AMG produces 355bhp and gets to 62mph in 4.6sec, placing it ahead of the S3 performance wise, though fuel efficiency is identical between the two at 40.9mpg. Prices are expected to be around £40,000 when both all-wheel drive sports saloons go on sale later this year. The regular A3 Saloon range should kick off below £25,000.