Audi has lifted the lid on its most powerful S3 and A3 TDI variants, with four-wheel drive offered for the first time. Prices, specs and pictures here 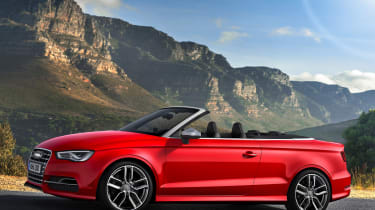 For the first time ever Audi is offering four-wheel drive variants of its A3 as convertibles. The hottest of the lot, the 296bhp S3 cabriolet is joined by the most potent diesel option, the 181bhp 2-litre TDI quattro cabriolet. With a folding fabric roof, the top can be automatically removed in under 18secs at speeds of up to 31mph.

The S3 cabriolet utilises the same 2-litre TFSI four-pot you can find in the normal tin top version, meaning it can charge from 0-62 in 5.4secs – two tenths slower than the normal car – and onto a limited top speed of 155mph. Power is pushed through a six-speed S Tronic semi-auto ‘box (no manual option here, sadly), driving all four wheels through a Haldex multi-plate clutch.

As a replacement for the existing 148bhp 2-litre TDI, the less potent but more efficient TDI option can be chosen with the same four-wheel drive technology as the S3 or as a front-wheel drive version. Power can be sent through a six-speed S Tronic or six-speed manual ‘box, depending on which box is ticked.

In front-driven manual form, the 0-62mph dash takes 7.9secs, but in the fastest S Tronic quattro set up the A3 TDI shaves three tenths off that time. Where the two-wheel drive variant wins is in economy, reaching 65.7mpg and producing 114g/km of CO2, compared with the quattro’s 56.5mpg and 132g/km of CO2.

Buyers of the TDI cabriolet can choose either the Sport or S Line specs, the former coming with 17inch alloys, 15mm lower sports suspension, aluminium interior trim and sports seats. The latter S Line comes with larger 18inch wheels, Xenon plus headlights and a more luxurious touch to the interior.

The hottest S3 is unsurprisingly the most visually aggressive of the bunch, matching its hardtop version with S specific bumpers, a grey radiator grille and partly polished 19inch alloys. Inside the same flat-bottomed steering wheel, S specific Nappa leather seats, sports dials and stainless steel pedals can also be found.

For those who enjoy being exposed to the elements, the S3 cabriolet can be yours from £38,910, some £6785 more than its hard top equivalent. The more efficient TDI’s prices start at £29,735, but you’ll need to spend £32,775 for a quattro equipped car. Order books are open now, with the first cars expected to arrive in the UK this September. 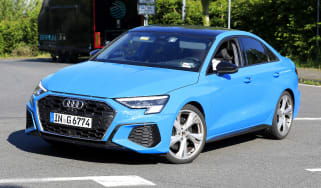 2020 Audi S3 Sportback and saloon out in the open