It’s a ubiquitous pairing, the EA888 and seven-speed S-tronic dual clutch gearbox, but it was here first if that makes a difference 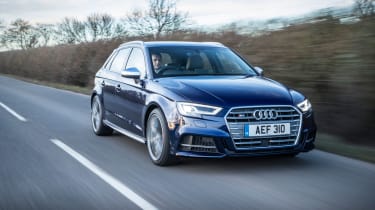 The engine is a cracker that pulls hard and encourages you to indulge its appetite for revs. It uses variable cam timing to increase efficiency at low revs while also improving power at the top end, and so it’s tractable when used gently, although there’s some lag below about 2000rpm if you try to wake it up too quickly. But mostly, you can use its broad power band as you choose – working it hard, which it enjoys, or trusting the gutsy mid-range to pull a taller ratio.

The S3 lacks the truly exquisite noise its big brother, the RS3, makes. The engine might only be an in-line four-cylinder turbo – rather than the five-cylinder found in the RS3 – but, with a little help from a sound-enhancing speaker in the bulkhead, it makes a pleasant enough noise. It’s a deep and cultured sound with a hard edge to it, but still doesn’t have the depth that hearing a real engine note has and remains slightly synthetic. 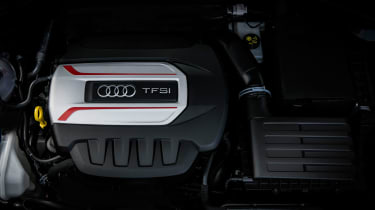 And while the S-tronic transmission is as slick and fast as you could ask for – it will even oblige with multiple downshifts – the steering wheel paddles feel a little lightweight. It does add some theatre to the action, blink-fast full throttle upshifts being accompanied by a racy ‘thrrapp’ from the exhaust, but it’s less natural than it should be, with an augmented soundtrack that some will like, but we’re less fond of.

As well as the variable cam timing mentioned before the S3’s 2-litre TFSI engine features a ‘dual injection’ induction system that combines the strengths of direct and indirect injection for greater efficiency.

With a long stroke and twin balancer shafts, Audi claims the S3’s motor delivers its torque in a very linear fashion, reaching a hefty 280lb ft (or 295lb ft when equipped with the S-tronic transmission) at just 1800rpm and sustaining it all the way through to 5500rpm. Power is sent predominantly to the front wheels, with a Haldex clutch on the rear axle transferring torque rearwards when necessary.