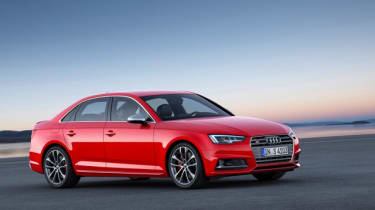 Audi has revealed its new S4 saloon and Avant models at the 2015 Frankfurt motor show. Powered by a new 3-litre twin-turbocharged V6 petrol engine, the new S4 will sprint to 62mph in 4.7-secs and is electronically limited to 155mph. 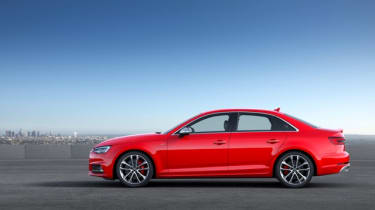 The new S4 saloon and Avant feature Audi’s Quattro four-wheel drive system complete with a centre-differential. In normal driving 60 per cent of the engine’s power and torque is sent to the rear axle, with up to 85 per cent able to be sent to the rear or 70 per cent to the front axle in extreme conditions. A new eight-speed automatic tiptronic gearbox has also been developed for the new S4.

Fitted as standard with Audi’s S suspension, the new S4 sits 23mm lower than a standard A4, with Audi’s active damper system available as an option. As with other fast Audi’s the engine and gearbox mapping, steering, differential and damping can all be individually controlled through Audi’s Drive Select system.

Distinguished by traditional Audi S design cues the new S4 features a new rear bumper and diffuser design, matt grey finish to the mirror housings and trim and, of course, a quartet of exhaust tips. LED front and rear lights will be standard, with the Avant also featuring an electronic tailgate. Options will include Audi’s Matrix LED headlights, a head-up display and remote sensor control for the tailgate.

Using a combination of aluminium and steel in its construction, the new S4 is around 55kg lighter than its predecessor.

Prices have yet to be announced for the new S4 saloon and Avant models, but expect a premium of around 10 per cent over the outgoing car, which started at £39,610 for the saloon. The new S4 models will go on sale in 2016.

You can catch up with more Frankfurt motor show launches on our show hub page.