Subtle estate packs a tubocharged punch; gets to 62mph in 4.7 seconds

Audi will add a new S4 Avant to its lineup at Geneva, following on from the S4 it revealed last year at the Frankfurt motor show.

Based on the latest-generation A4 Avant that debuted last year, you’d need to be a real fan of the marque to differentiate it from cooking models, but subtlety has arguably always been part of the S4 Avant’s appeal.

All the traditional S touches are present and correct: The front and rear bumpers have a slightly more aggressive appearance than those of standard models, with larger air vents at the front and a honeycomb grille, aluminium diffuser and four tailpipes at the rear. 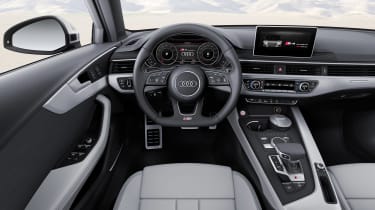 The 0-62mph sprint now takes 4.7 seconds (down from 5.1sec), though the 155mph electronically-limited top speed is the same as before. The European combined fuel economy figure is a respectable 38.2mpg, though actually achieving that on the road might be more of a struggle.

An eight-speed tiptronic automatic delegates power to all four wheels – with a slight bias to those at the rear, while torque vectoring distributes grunt to those tyres best able to turn it into forward motion. Electric power steering is standard, with variable-ratio dynamic steering an option.