The Audi S5 sports coupe originally launched with a V8 engine, shared with the RS4 saloon 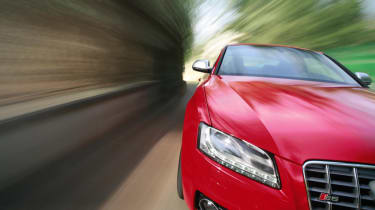 Tell you how my love affair with the Audi A5 started. I was in Munich with BMW driving a 120d somewhere near the airport. It was cold under a grey blanket sky and had been snowing intermittently all morning. As I slowed for traffic backed up from a set of lights, a black blur, slashed through with the icy white glow of LED running lights, lunged out of a junction on the other side of the carriageway and accelerated hard down the road. It looked good and sounded better. In fact, it sounded a little like a Lamborghini Gallardo; that V10 soundtrack is as distinctive as it is addictive.

The noise and vision mixed with the sudden realisation that what I’d just seen may have been an early running prototype of the RS5 genuinely gave me a small shudder of anticipation. From that moment I’ve been itching to get behind the wheel of a fast A5. I haven’t had to wait long but it isn’t the RS5 just yet.

Admiring a mighty view to my left as we woofle along the gently snaking road that hugs the shoreline of Lake Garda in northern Italy, I’m in an Audi S5 – the harder (but sub-hardcore) range-topper launched with the rest of the A5 line-up at Geneva in early March. The S5 gets the 4.2-litre FSI V8 from the RS4 driving to all four wheels via a six-speed manual gearbox, but in a softer state of tune, developing 354bhp instead of 414bhp but slightly more torque – 324lb ft plays 317lb ft. Audi claims 0-62mph in a decidedly nippy 5.1sec and a top speed limited to 155mph.

The genesis of the A5 is the deeply sexy Nuvolari concept car, an artfully distended TT that was first shown back in 2003. Effectively, the A5 is the productionised version of that – minus the TT overtones and quite a lot of the sex. From a market perspective, it plugs the gap between the TT and the mid-engined R8 supercar.

Physically, at 4630mm long, it slots neatly between the A4 and A6 saloons. Audi calls it a ‘modern grand tourer’, maybe trying to distance it from its most obvious rivals, the new BMW 3-series coupe and the ageing and never-all- that-pretty Merc CLK. I think the Audi just edges the Bee Em for drama and presence but is perhaps a little less cohesive, especially around the C-pillar, which looks like the dead spot of the design.

All right, maybe Walter de’Silva, creator of the Nuvolari and VW Group’s head of design, didn’t phone it in from the beach as Richard Porter suggested in his Geneva report, but it’s hard to believe the great man’s on record as saying the A5 is the most beautiful car he’s ever designed. Clearly Walter has completely forgotten he ever worked for Alfa Romeo, whilst the gorgeous Lamborghini Miura concept has suddenly slipped his mind.

No matter, the latest Audi might not be quite the masterpiece de’Silva imagines but it is cool and attracts plenty of admiring glances. The S5 identifiers – slightly more aggressive ‘goatee grille’, uber-cool LED daytime running lights, deep, aluminium-edged front spoiler, discreet S5 badging, gorgeous five-spoke alloys and quad exhausts – are integrated into the overall design so seamlessly, the final effect is subtly understated, almost stealthy.

Of course, 19-inch alloy wheels and ultra-low-profile rubber don’t necessarily signify anything special, but when they fill the swollen wheelarches so deliciously and are set off against the lowered suspension, suspicions should indeed be aroused that this is an Audi less ordinary.

Design highlights on the inside include the softly glinting steel starter button next to the gearlever, tastefully understated carbonfibre trim accents and the MMI multi-function controller, now moved up to the dash like a TT’s. And the keyless entry system allows the satisfying get-in-and-go lifestyle enjoyed by some Mercedes owners, among others. The keyless fob even stores all the car’s diagnostic readings, cutting servicing times.

The S5’s interior isn’t what you’d call inspirational but it is beautifully done with great seats, a fine driving position, peerless ergonomics and sensational build quality. What it doesn’t have is much rear legroom. Audi reckons this is a practical coupe – and, true, the boot’s a generous 455 litres – but the rear is a no-go area for six-footers. A black mark but hardly a deal-breaker.

The A5’s true significance is that it’s the first Audi to get a new front/mid-engined layout, where the front wheels are pushed forward, and the engine back, to give a more balanced weight distribution, keep the major masses inside the axis of the axles and improve the handling. And, to keep unsprung weight down, there are aluminium suspension components front and rear.

It isn’t as easy as it should be to click with the S5 as you pull away for the first time. The V8 responds with such manic fervour to the first half inch of throttle travel – after which the remaining three inches understandably feel a bit flat – it’s hard to get going without a crescendo of wasted revs and no easier to nullify the effects of the slight slack in the driveline until you learn to apply precisely the correct amount of right-foot delicacy. The gearchange can feel disappointingly notchy if rushed, too. But within the first few miles, the Audi’s pace and poise are fairly obvious.

We hang a left and leave the splendour of Lake Garda’s shoreline to head up into the hills. As the road climbs, I’m beginning to be seduced by how smooth and refined the Audi’s manners are. The body structure feels extremely stiff and the suspension works quietly. Even on the bumpiest sections, it soaks up punishment in a way that rarely disrupts the sense of calm in the cabin.

And there’s no denying the deep reserves of grip or the S5’s fluent way of stringing together combinations of bends. Yet the process isn’t nearly as involving as it is uniformly competent. It’s a maximum grip ‘n’ grunt deal. The rewards for a press-on approach are measured out in ground covered for time elapsed rather than smiles per mile. Just as the S5 refuses to be ruffled, so does the driver’s pulse rate.

Away from the mountain hairpins – something of an understeer fest, no matter whether ESP is switched on or off – we hit more open, flowing roads. I find myself measuring out the performance as I need it, and the good news is that there always seems to be more to come. Call on all of it and the shove develops a satisfying weight and urgency as the engine note hardens.

Yet it’s the smoothness and refinement that dominate – a kind of velvety velocity that’s deceptive but never truly ignites the anticipated thrill. Technically, the chassis hits all the right notes. The S5 carries fine speed through bends with little roll and a flat, smooth ride. Its contempt of camber and road surface is admirable.

Despite initially feeling rather cumbersome, the steering offers decent precision and reasonable feel. It’s hard to get it wrong in the S5, but rare to feel anything other than detached from the action. The let down is all the more poignant after the RS4 in which you feel empowered not just by the reach and completeness of the performance but by its ability to entertain.

So forgive me if I put the love affair on hold for the time being. The S5 is a good car but perhaps only as good as Audi wants it to be. The RS5 had better be the best A5 Audi knows how to make.

A bit like deciding that your unborn child should be called Bernard and then it popping out without a winkle, the launch of the S5 with a manual gearbox was unexpected and slightly perplexing. The big, sleek, woofly coupe just seemed ripe for a self-shuffler.

But now, 18 months later, Audi is offering a six-speed tiptronic option on the S5. It’s a fine gearbox; the small paddles attached to the back of the steering wheel summon up brisk and smooth changes allowing you to make brisk and smooth progress. It’s slightly strange that there’s no sport option if you want to let the gearbox swap ratios on its own, but otherwise it’s everything you’d expect it to be.

And yet… the Auto actually shows that Audi was right to launch the S5 with a manual. The manual ’box gives the car more character, as befits an S model, and the wonderful engine feels slightly more muscular (the auto is 0.3sec slower to 62mph). You can even leave it in sixth on a fast road and there’s enough torque to make your left leg as redundant as in the tiptronic. So buy an S5 manual and save £1400. 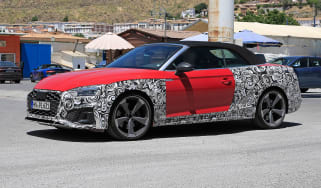 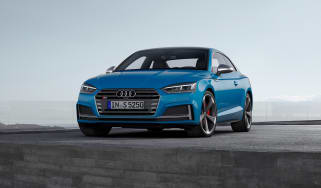