The 190mph S8 Plus is Audi’s fastest ever S model

597bhp Plus is the most powerful car in its class 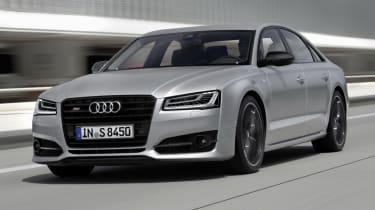 The technical details of Audi’s new S8 Plus have been revealed, confirming it is the most powerful model in the luxury super-saloon segment. Powered by a more potent variant of the regular S8’s 4-litre V8 TFSI engine, the Plus produces a staggering 597bhp and 553lb ft of torque, an increase of 84bhp and 47lb ft over the regular car. This helps the Plus shed three-tenths from the S8’s 4.1sec 0-62mph time, while the optional removal of its 155mph limiter enables it to reach a 189.5mph top speed.

To put those numbers into perspective, the S8 Plus is just four-tenths of a second slower to 62mph and 8.5mph off of the top speed of Audi’s all-new R8 V10 sports car. For a car that weighs close to two-tons and can seat four passengers in luxury, it’s truly mind-boggling.

To achieve these big numbers, Audi adjusted the twin-turbocharged V8’s engine control mapping and upped boost pressure. Also, the inner geometry of the turbos has been optimised further and the exhaust valves have been modified, allowing for faster flowing gases. Admittedly, the S8 Plus only produces its full 553lb ft of torque in overboost mode, but it still manages a substantial 516lb ft in normal running. 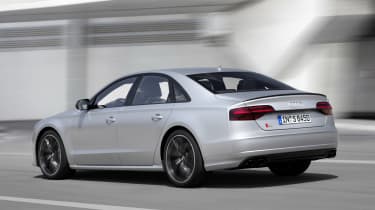 Drive is sent to all four wheels through the same eight-speed Tiptronic automatic gearbox as the S8, but Audi has reworked the S8’s adaptive air suspension to ensure the more accelerative Plus can better handle the power. The dynamic steering – a system we’re still yet to agree with – has also received bespoke adjustments.

The S8 Plus will also come with an optional Dynamic Package (it’s standard in autobahn-strewn Germany), which adds carbonfibre reinforced brakes and removes the 155mph limiter. Though its price is yet to be confirmed, the package is expected to be a sub-£10,000 option.

To mark out its Plus status in its domestic market, German bought cars will sit on 21-inch diameter and 275-width wheels. UK buyers will likely prefer to stick with the smaller 20-inch items. Also included is a Plus lip spoiler on the bootlid (available in carbonfibre), carbon side air inlets, gloss black grille bars, darkened tail lights and a gloss black diffuser insert, while the dual-branch sports exhaust system features gloss black tailpipes. For buyers wanting a more discreet look, the S8 styling package can be optioned instead. German customers will receive Matrix LED front headlights as standard; elsewhere they’re an option. 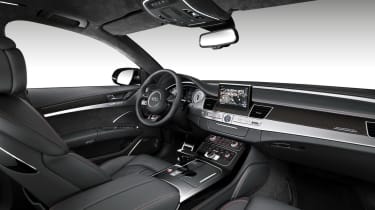 Inside, the overall layout is unchanged from the regular S8, which means full leather with contrasting stitching and piping on the seats and trim. The headlining is covered in black Alcantara, and the dash gets S-spec dials and a pop-up display on the centre console (the S8 is yet to receive Audi’s latest TFT dash).

When we last drove the S8 in non-Plus form, we admired its effortless engine and ability to defy the laws of physics, surging towards its top speed in a relenting, linear manner. But despite the air-suspension’s best efforts, the S8 couldn’t hide its 1990kg mass through the corners.

That being said, the S8 isn’t a car in which you attack country roads, but rather, it’s a superfast and ultra-luxurious point-to-point weapon. Order books for the new S8 Plus open in October, with prices starting from £97,700 - £16,965 more than the standard S8. 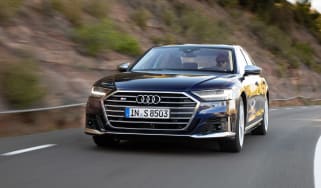 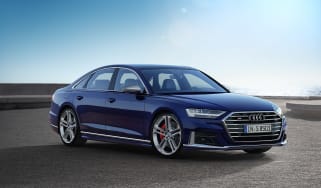