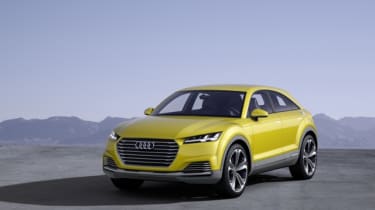 Audi has unveiled the TT Offroad concept car at the Beijing motor show, a new member of what could be a new family of TT-based cars. Production is not yet certain, but if the car is built, it will rival the likes of the BMW X4, Porsche Macan and Range Rover Evoque.

The concept is powered by a 402bhp hybrid drivetrain, which consists of a 288bhp 2.0-litre TFSI engine, and a 40kw electric motor. The Offroad concept is able to run in electric only mode for a maximum of 31 miles, which helps the car achieve its 148mpg figure. Performance is expectedly brisk, with 0-62mph coming up in 5.2secs, going on to a limited top speed of 155mph.

As with the TT, and a rather large number of other VW Group cars, the TT Offroad is based on the company’s highly adaptable MQB platform. The dimensions of the car are not dissimilar to the current Q3 model, but is significantly lower, echoing the cars more sporty nature.

An important new feature that Audi is keen to show off is wireless charging. With the car parked over a specially installed plate, the Audi TT Offroad can be charged in a similar amount of time to a regular cable, without any of the fuss. When running in electric only mode, the rear-mounted motor is capable of propelling the TT to around 80mph, with no intervention from the petrol engine.

‘The Audi TT offroad concept provides a glimpse of how we might imagine a new model in the future TT family,’ says Dr. Ulrich Hackenberg, Audi’s tech boss. ‘It combines the sporty genes of the TT with the strengths of a compact Audi SUV’.