Rapid RS Roadster is the best drop-top TT yet 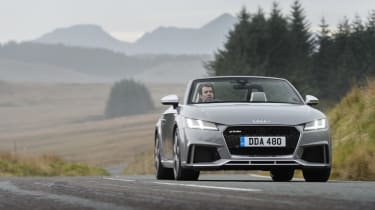 The new TT RS Roadster is the fastest and most powerful drop-top TT to date. When we drove the coupe version on the international launch in Spain two months ago we found much to enjoy about it – in fact, we reckoned it to be one of the most enjoyable fast TTs ever.

The Roadster version replaces the coupe’s fixed metal roof with a folding fabric item – which can be lowered or raised in seconds at speeds up to 31mph – and it does without the two small (or should that be too small?) rear seats.

The five-cylinder, 2.5-litre turbo engine is the car’s centrepiece. It develops a considerable 394bhp with 354lb ft of torque ready at just 1700rpm, which means the TT RS outguns the likes of Porsche’s 718 Boxster S and Mercedes’ SLC 43 AMG quite comfortably.

The only gearbox option is a seven-speed twin clutch unit. Drive is sent to all four wheels, of course, but this new RS uses a quattro four-wheel drive system that can send 100 per cent of torque to either axle – although it’ll only do so in extreme circumstances.

A launch control system helps the RS record a deeply impressive 0-62mph time of 3.9 seconds, which is supercar territory. The top speed is limited to 155mph, although customers can pay a little extra to have that limiter lifted to 174mph. You know, just in case. 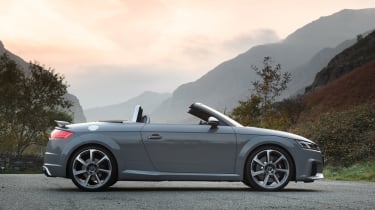 The most significant technical achievement compared to the previous RS Roadster is the removal of weight from beneath the bonnet. The engine is now some 26kg lighter than before – thanks mostly to a new aluminium crankcase that sheds 18kg – which should make a huge difference given that the engine is mounted forward of the front axle.

Nonetheless the RS Roadster is still on the chunky side. At 1605kg it’s 90kg heavier than the coupe and, crucially, 145kg more portly than the Boxster S (with PDK).

There are a couple of optional packages that keen drivers will be interested in. The Dynamic Pack costs £1600 and adds a sports exhaust and Audi magnetic ride – or adaptive dampers – while the Dynamic Pack Plus costs an additional £1000 and lifts the top speed to 174mph.

Firstly, it should be noted that the quality of the cabin is very good indeed with a modern, attractive and minimalist design. Our test car was fitted with the £2600 Dynamic Pack Plus, and at lower speeds there is just enough give in the suspension to give a cushioned and settled ride quality on the optional 20-inch wheels. Without adaptive dampers, however, the RS’s ride can feel quite choppy on the UK’s bumpier roads.

The structure generally feels quite stiff, and although you are aware of the windscreen surround shuddering slightly over very rough surfaces there’s never any sense of the shell twisting or distorting in hard cornering.

With so much power and torque the Roadster is a very fast car indeed, but it doesn’t hit with quite the intensity that you might expect beyond 50mph or so. The engine is responsive and it has a distinct vocal character – further improved by the optional sports exhaust – but with peak power arriving before 6000rpm it’s not an engine that lights up in the upper reaches of the rev range. The gearbox, meanwhile, is very quick and refined.

In outright dynamic terms the latest TT RS Roadster is a good improvement over the previous car with crisp, precise steering – though never much genuine steering feel – and good pliancy over bumps. With so much less weight over the front end than before the new car feels agile and keen to change direction, too, with a less resolutely nose-led attitude in cornering. 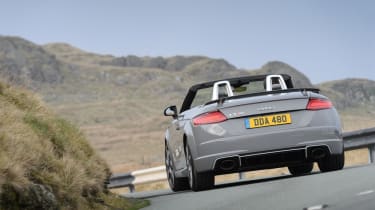 Accordingly there is the slightest sense of adjustability and poise in the chassis in the first part of a corner, but ultimately the car will only ever fall into gentle understeer if you push it beyond its limits. And despite the four-wheel drive system being technically capable of sending all torque to the rear axle, you’ll never actually feel it do so when powering away from a bend.

Unlike both generations of R8 the new TT RS Roadster does more or less read from the very well thumbed Audi dynamic textbook – huge grip and traction, plenty of body control and lots of stability, but gentle understeer beyond the limit and not much by way of excitement – but it does so while feeling lighter on its toes and more agile than ever before.

While the Boxster S remains the more rewarding steer, the new TT RS Roadster will at least raise a smile on a twisting road and with so much straight-line performance the Audi will keep pace with much more expensive machinery.