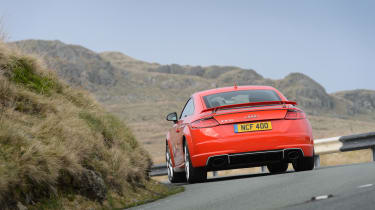 This is the second generation of Audi TT RS (the very first generation of TT didn’t get an RS model, with the stripped-out Sport being the most extreme version). It is available in both coupe and roadster forms from launch, but here we concentrate on the fixed roof car. The launch of the RS also coincides with 40 years of the Audi five-cylinder engine.

The turbocharged, 2.5-litre, five-cylinder engine is all-new and now puts out a mighty 394bhp and 354lb ft of torque, the latter available from just 1700rpm. Deploying this to the road is Audi’s seven-speed, dual-clutch, S tronic transmission (there’s no manual ‘box option) and of course there is quattro all-wheel drive, of which more in a bit. 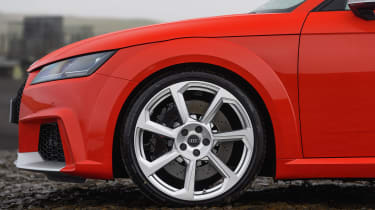 As you might expect, traction off the line is deeply impressive. To activate the launch control you need to be in Dynamic mode, with the transmission and ESC both in Sport. Then it’s simply a case of holding the RS on the brakes with your left foot and pushing the throttle all the way through the kickdown to the end of its travel. The revs will hold at about 3500rpm with the car sounding for all the world like a WRC machine and then you just release the brakes. The claimed time for the sprint to 62mph (100km/h) is 3.7sec but using an app installed on the TT RS we recorded a 3.4sec sprint on Jarama’s main straight, quicker than the 3.5 seconds evo once recorded in an Enzo and near as dammit McLaren F1 quick in an Audi TT. Madness.

Great efforts have been made to strip weight out of the engine and the impressive result is a reduction of 26kg. That’s obviously particularly useful given that the five cylinders are ahead of the front wheels. The reduction has mainly been achieved with a new aluminium crankcase, which saves 18kg. Overall, the new TT RS is 35kg lighter than the previous generation and although 1515kg still sounds fairly hefty it’s only 55kg heavier than the two seat, rear-wheel drive, four-cylinder, 718 Cayman.

For the first time it is possible to alter the way the quattro shuffles torque front to rear, choosing between Comfort (which biases the front axle), Auto and Dynamic (which punts more towards the rear).

OLED (Organic Light-Emitting Diode) rear lights are also available as an option for the first time on an Audi. 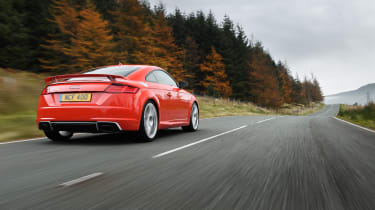 The first time that you floor the accelerator with the sports exhaust cracked wide open it’s hard not to fall for the TT RS. A loud, complex soundtrack fills the cabin, the note changing from deep warble to something harder edged but still slightly askew as the revs home in on 7000rpm. The five-cylinder produces as distinctive a war cry as any engine and Audi plays it to perfection.

That first surge of acceleration will also leave you in no doubt as to how stunningly fast the little coupe is. The power feels totally contained, however, with the quattro deploying every ounce of the 394bhp. It’s bursting with energy but in the dry at least, that energy is all put to good use with no sense of slip twixt rubber and road. This is perhaps something of a disappointment because it means that on the exit of bends the TT simply grips and goes. Yes you can feel the TT driving more from the rear with the Haldex system set to its new Dynamic mode, but the rear simply hunkers down and drives you forward rather than allowing you to really adjust the arc of the back of the car on the throttle. You also need to keep on top of the gears going into corners, because if you are below about 4000rpm, then there is a little bit of hesitancy when you get back on the throttle.

Both of the RSs that we drove (on track and then road) were equipped with the standard passive dampers as opposed to the optional adjustable Magnetic Ride dampers and it’s a set up that we would heartily recommend. Although the RS rides 10mm lower than the standard TT it doesn’t crash or jitter like you might expect of a fast Audi at low speed. In fact there is a sense of decent travel within the arches and the suspension allows enough roll and pitch to let the driver know how the car is moving around while still retaining complete control of the body. It is nicely judged.

The turn-in to corners is very encouraging, with the front end feeling more responsive than any TT I can remember – something that is undoubtedly helped by the RS’s brake-based torque vectoring. The eight-piston front callipers clamp steel discs as standard but carbon ceramics are an option and they were fitted to our test car. They were hugely confidence inspiring but did begin to squeal after a long drive with some pretty sustained abuse. You find yourself leaning on the brakes deep into corners too in an effort to get the car pivoting into the apex so that you can perhaps open the steering a little early. It is possible, and you can feel the hips start to move encouragingly but it takes more effort than I’d like and generally there is a sense that the RS is happiest with more of a join the dots approach to corners.

I enjoyed the TT RS both on Jarama (it felt great through the really quick corners – nicely agile and up on its toes) and on the amazing roads that seem to be the norm wherever you go in Spain. The sound is wonderfully addictive and the interior feels like a lovely place to be, with the quilted bucket seats holding you extremely well around the abdomen.

It covers the ground at a staggering pace and the quick clean steering makes it mostly easy to place although just occasionally a fraction more weight and connection with the front wheels would have been nice. You can and do end up driving it incredibly quickly, pushing it hard because it inspires huge confidence, but in many ways it’s probably better to step back a notch and enjoy the RS at eight tenths. Don’t for a minute write it off as a boring, understeering Audi because it is far, far from it, but at the end of the day I couldn’t shake the nagging feeling that a four-wheel drive system like that in the Focus RS, one with a proper torque vectoring rear diff that allows more throttle adjustability, would elevate the TT that last little bit to the star performer that it so nearly threatens to be. 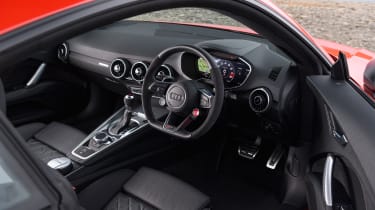 The TT RS Coupe costs £51,800 in the UK while the TT RS Roadster retails at £1750 more, with a price of £53,550. For comparison, an equivalent spec Porsche 718 Cayman S with PDK and Sport Chrono (surely the TT RS’s closest rival) costs £52,172. The Porsche also has 49bhp less than the Audi and is half a second slower to 62mph. The 2+2 from Ingolstadt piles on the pressure still further with the better soundtrack but the Porsche counters with unmatched chassis balance. Choosing between the two has never been trickier.

There are two specific RS colours; Nardo Grey and Catalunya Red. It is also possible to spec the TT RS with a normal automatically extending rear spoiler. Although they didn’t have any such cars on the launch I rather like the idea as I think it might give the car something of a purposeful yet stealthy, 911 R look.