ABT takes Audi TTS to 365bhp 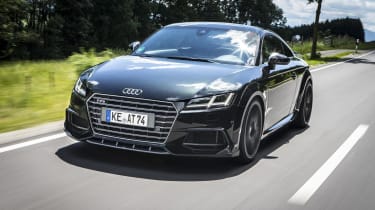 The paint has barely dried on ABT Sportsline’s Q7 bodykit package, but the German tuning company has already turned its attention to the Audi TTS.

The most convincing TT yet, Audi’s coupe is particularly talented in TTS form, and that’s the model ABT has worked additional magic on.

Powered by a 2.0-litre turbocharged petrol engine, the standard car’s 306bhp swells to 365bhp with ABT’s engine management modifications, with further improvements on the way in the form of an ABT Power S.

The company says its alterations do little to change the car’s fuel consumption or driveability. While no figures have been confirmed, it's fair to say the modifications should improve the TTS's acceleration abilities - the standard TTS completes the 0-62mph dash in 4.7sec.

Chassis upgrades haven’t been ignored in the ABT power-fest, with a set of ABT suspension springs and uprated anti-roll bars. Standard dampers are retained, while springs chop up to 30mm from the car’s ride height.

The car’s stance is improved with a set of 24mm or 30mm wheel spacers, combined with a selection of 18, 19 or 20-inch alloy wheels.

Visual alterations amount to a new front skirt with an offset spoiler lip, and a range of glossy, matte, pearl and metallic wraps are available to change the car’s appearance further.

At the back there’s an ABT exhaust system with four, black-chrome tailpipes and what the firm describes as a ‘prominent sound’. A sport catalytic converter is optional.

Prices for the components haven't been confirmed, while ABT's warranty will vary depending on your locale.