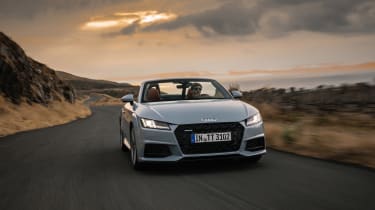 Audi quietly launched the updated TT earlier this year, but full details of the cars for the UK market have only now been announced thanks to the emissions testing backlog needed to comply with new WLTP regulations. Both the flagship Audi TTS, which we drove in the summer on the Isle of Man, and standard TT models will be back on sale from January next year, featuring updated styling and engines. Audi has also revealed details of the Audi TT 20 Years Edition, designed in homage to the TT Concept that was shown back in 1998 with bespoke detailing and trim.

Opening the range is a new 194bhp 40 TFSi model, using a 2-litre turbocharged four-cylinder engine matched to either a six-speed manual or seven-speed S-tronic dual-clutch gearbox. This engine replaces the previous 1.8-litre TFSi, and is only available with front-wheel drive. Next up is the 45 TFSi, which uses a more powerful 242bhp 2-litre turbocharged four-cylinder engine, this model is fitted with quattro all-wheel drive, albeit only when combined with the dual-clutch gearbox. A manual, front-wheel drive 45 TFSi model is also available. All of these variations are offered in either Coupe or Roadster form, as well as standard or sportier S-Line trim levels.

> Click here for our review of the updated Audi TTS

The TTS retains the same engine as before, but suffers a 4bhp power drop to 302bhp thanks to the fitment of a particulate filter to meet new emissions regulations. The TTS is also only available with a dual-clutch gearbox and quattro all-wheel drive. 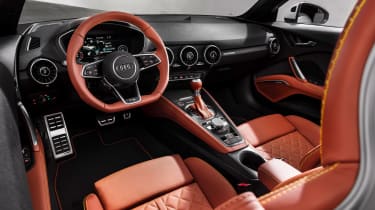 Styling changes on the standard TT model are subtle, with little more than a new grille pattern being added, but it’s the S-Line and TTS models that pick up more aggressive changes, including reworked bumpers front and rear, new alloy wheel designs and the option of colour coding the new detailing on the bumpers in either silver or black. You can also now specify the fixed rear spoiler from the TT RS for an even more aggressive look. Software changes have also been made to the TT’s virtual cockpit to keep it up to date with all the latest Audi models, but the overall interior has few updates, which is no bad thing.

As mentioned above, Audi will also bring its 20 Years Edition model to the UK, combining a raft of aesthetic and specification additions designed to mirror the spec of the TT Roadster Concept that preceded the production car in 1998. Available in a bespoke Arrow Grey hue, it also includes unique ‘trumpet’ exhaust outlets, Matrix LED headlights, and the OLED rear lights that are only available as an option on the TT RS.

> Click here for our review of the Audi TT RS

Inside, the 20 Years Edition’s most dramatic take on the original is seen, combining the tan ‘baseball’ leather interior of the original concept (and subsequent early production model) with a corresponding finish on the steering wheel and doors. Manufactured through Audi’s ‘Individual’ program, this is just another example of the lengths that buyers can go to in specifying a new Audi to their taste.

Pricing for the UK has yet to be announced, but orders will be taken from mid-January next year so we’ll know exactly how much it is before then.