The 2018 RM Sotheby’s London sale is nearly upon us. Here’s the pick of the lots… 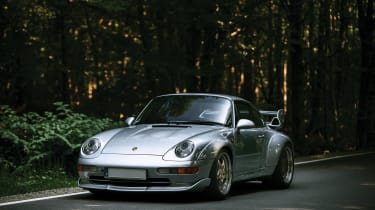 RM Sotheby’s will kick off its annual London auction in Battersea tomorrow with hundreds of rare, exotic and unusual cars going under the hammer. With 96 different lots available in the sale, buyers will be spoilt for choice with the vast array of machinery on display at Battersea Evolution, inside Battersea Park.

From Ayrton Senna’s former go-kart to a Lamborghini Aventador SV and lots more in-between, there’s an impressive selection of cars up for grabs. There’s a particularly good crop of Maseratis including a 1962 5000 GT by Allemano while a 2015 Porsche 918 Spyder could be yours for something close to the £1.2m mark and there’s a 2003 Ferrari Enzo expected to nudge the £2m barrier. Putting all these in the shade, however, here are our top five picks of this year’s sale…

The Porsche 911R is considered one of the best 911’s ever produced, (we gave it five stars when we reviewed it) and this example only has 37 miles on the clock. Its custom built six-speed manual gearbox and 4-litre, naturally aspirated flat-six help make it one of the best and most engaging Porsches’ to drive. Its rarity will mean it’s unlikely you will bump into one on the street with only 991 having been made. The guide price starts at £275,000.

Another Porsche at the auction is the 1996 Porsche 911 GT2.  Only 190 examples were built and this one retains all its original parts.  The huge two-tier rear spoiler complete with air ducts along with the flared wheel arches help give a typically aggressive look. Even though it’s over 20 years old, this 911 is still as desirable as ever, with a guide price starting at £725,000.

The Mercedes-Benz 190E 2.5-16 Evolution II is another big name German car in the sale. Only 502 of these were built as homologation specials for the 190E which became one of the most successful DTM racers ever. Its comically big spoiler and oversized wheelarches mark it out. So too does its 2.5 litre Cosworth fettled 16-valve engine which produces 235bhp. The guide price is £135,000.

A 1971 Lamborghini Miura P400 S that was once owned by rock and roll singer Rod Stewart is another highlight. It has been painstakingly restored by Lamborghini Polo Storico at a cost of €400,000. It is now considered to be one of the best examples of a Miura S on the road. The guide price for this is between £1.2 million and £1.4million. 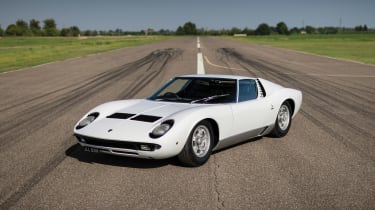 Finally, a 1961 Aston Martin DB4GT is the most expensive car at auction with a guide price between £3million and £3.4 million. It is only one of 75 DB4GTs ever built and legendary actor Peter Sellers once owned this particular one. Optional occasional rear seats have been fitted to this car as the standard DB4 GT ditches them for lightness.