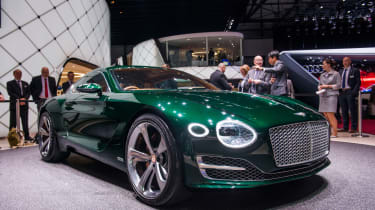 Bentley has rolled out a brand new concept which, from the looks of it, could end up being a potential Porsche 911 rival.

Called the EXP10 Speed 6, early images show a drastically redesigned car from the familiar Continental GT. Smaller and more compact than a traditional Bentley, the Speed 6 was unveiled at a special VW group night prior to the opening of the Geneva motor show.

The rear end of the Speed 6 features a sleek and simple design, with quad exhausts and a single set of lights. Headlights are a continuition of the design used in a Continental, but again simplified. There's more than a hint of the Bentley Hunaudières concept about the EXP10's grille, too - one of Bentley's best-known concept cars and one which eventually spawned the Bugatti Veyron under the wider Volkswagen empire.

The interior represents everything you'd expect from a Bentley, with a contemporary touch. The design is much more dramatic than that of current production models, but more than a hint of the Continental GT's sectioned cabin can be seen in the Speed 6's dramatically swooping centre console and instrument binnacle surround.

A large, portrait-orientated touchscreen sits in the narrow centre console and ahead of the driver sit two large dials - one virtual, flowing into a central display in the instrument cluser, while the tachometer features a chronograph-style flourish with minor dials located in its centre.

Several controls feature Bentley's familiar knurled metal finish, while leather, aluminium and cherry wood are used throughout the cabin's construction. Behind each seat is an individual luggage compartment fitted, in the concept, with a purpose-designed four-piece luggage set. 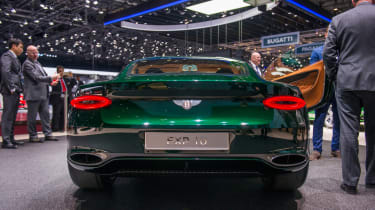 Engine details are yet to be confirmed, and while modern Bentleys typically use either V8 or W12 engine layouts, the Speed 6 moniker hints at a six cylinder powertrain. The number is used throughout the concept's design, particularly notable in its meshed grille. Clever 3D geometry techniques mean the scripted '6' is only visible when the car is viewed from a specific angle.

Stay tuned for more on the Bentley EXP10 Speed 6 concept when it goes on general display at the Geneva motor show - we'll be on the show floor to bring you a full image gallery and even more details.