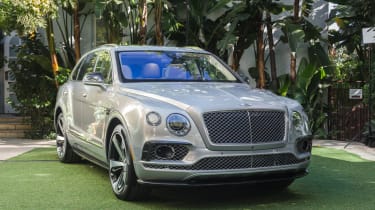 Bentley has revealed a limited-run version of its Bentayga super-SUV, reserved for 608 of the model’s first customers. Revealed in Los Angeles ahead of the LA auto show, the Bentayga First Edition gains model-specific features such as Union Flag badging, custom wheels and bespoke seat embroidery.

To set the model apart from the regular Bentayga, buyers of First Edition cars can choose from 10 exclusive exterior paint colours. The car’s 22-inch wheels are also now finished in black paint and polished metal, as opposed to the silver paint of the standard car’s wheels. 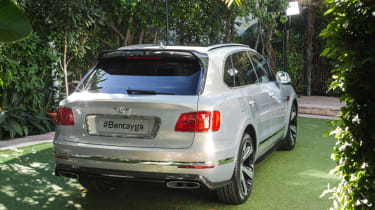 Also on the list of new features are illuminated tread plates, quilted interior trim, bespoke ambient lighting and contrasting stitching. They join the cabin’s expanse of metal, wood and leather trim to give the Bentayga First Edition a subtle but noticeably different finish.

Mechanically speaking, the First Edition is identical to the regular car – it’s powered by Bentley’s twin-turbocharged 6-litre W12 that produces 600bhp and 663lb ft of torque, and can propel the 2.3-ton super-SUV from 0 to 62mph in a claimed four seconds. Top Speed remains a quoted 187mph – this number ensures the Bentayga is officially the world’s fastest production SUV. 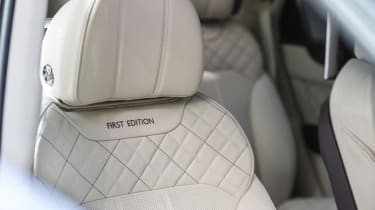 Kevin Rose, Bentley’s board member for sales, marketing and aftersales, said of the First Edition: ‘We have created the ultimate expression of the Bentayga’s spirit. It is equipped with an array of striking features that celebrate both the pioneering nature of the Bentayga and its unique abilities.’

Buyers of the First Edition will also receive a choice of three Bentayga Edition Breitling watches. These watches will later be offered as an option to regular Bentayga buyers.