Is this Bentley concept the future of luxury cars?

Layout, materials and technology are all explored in Future of Luxury concept 'pod' 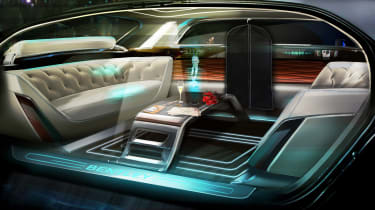 Look closely at this interior image created by Bentley – can you see any provision for a driver? This concept, titled ‘The Future of Luxury’, has been created by Bentley to express how a cabin of the future may look. For those who accuse the British-based manufacturer of looking to the past to influence its future, this image is a striking riposte. Speaking to evo at a small event in London, Director of Design Stefan Sielaff said that the interior concept would be less of a surprise to those Bentley owners who already use chauffeurs; ‘after all, perhaps we invented the concept of autonomous driving’. What’s interesting about the image is that the traditional driver environment does not exist at all. The roofline is clearly more raked towards the left side, which hints at the direction of travel, but there is no steering wheel, no single seat and no gearlever or pedals. Curiously, there are no seatbelts either. Other features of note include information screens seemingly lacquered on to traditional wood panels. Sielaff explained that this is ‘closer to reality than you may think’ and proceeded to demonstrate a transparent screen just 0.5mm thick that played a hi-res Bentley video. Sielaff then proceeded to bend and flex the screen, and explained that it can be positioned much like a veneer over virtually any material – including wood. Sielaff also revealed that Bentley will be offering stone as an interior option soon, and ‘protein leathers and textiles that will appeal to those with a vegan lifestyle’. The holographic projection is arguably the most striking feature – look closely and you’ll see that this character is dressed as a butler. Other apparitions would be available – we’d pick Princess Leia of course. This ‘butler’ is the primary interface with the vehicle. The final key feature is the quilted wood; a juxtaposition that Sielaff believes reflects a national identity. ‘Only the British can bring opposite parts together.’ 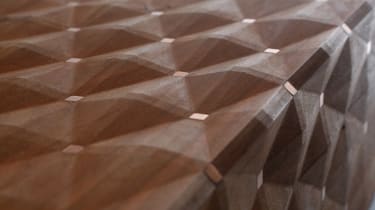