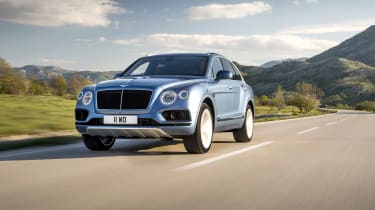 Diesel might be falling out of favour in smaller vehicles but luxury manufacturers are only just getting started, and the latest to adopt Rudolph’s work is Bentley, with the new Bentayga Diesel.

It is the first time the luxury manufacturer has dabbled with diesel and in true Bentley style the company hasn’t merely dipped a toe in, packing its first SUV with a 4-litre V8 engine that only runs out of urge at 168mph.

Bentley says it delivers an ‘authentic Bentley driving experience’, and on paper at least the figures back that up. The 664lb ft torque output is available from 1000rpm, and while peak power of 429bhp is low by Bentley standards it’s still fairly sizeable for a car of this type.

It utilises variable-geometry, twin-scroll turbochargers to boost exhaust gases, and a separate electric supercharger to eliminate turbo lag - it’s capable of spooling up in 30 microseconds. There’s high-technology at the other end too, with an acoustically engineered exhaust - not for a sporty sound, as you might expect, but to enhance refinement and minimise noise.

The gearbox is an eight-speed ZF automatic, sending power to a permanent all-wheel drive system with a Torsen centre differential. 60 per cent of the engine’s torque is sent to the rear wheels.

0-60mph takes 4.6sec (and 0-62mph a further two tenths), but the figures likely to tempt owners from the W12-powered petrol Bentayga are those pertaining to economy and range.

A combined figure of 35.8mpg satisfies the former (and 38.2mpg in “extra urban” driving) with 210g/km of CO2. Neither figure will impress hardcore hypermilers, but with an 85-litre fuel tank Bentley says the Bentayga Diesel will do over 621 miles on a tank. It also has stop-start, for benefits in urban traffic.

As you might expect, Bentley hasn’t gone too far out of its way to mark the car out as a diesel, with only a new exhaust tailpipe design (dubbed “twin quad”), a subtle V8 Diesel badge low on the front door, and a black matrix grille with a chrome surround. 20-inch alloy wheels are standard, with a 21in Mulliner design an option.

Pricing has not yet been confirmed, but expect it to undercut the £160,200 asked of a W12-engined Bentayga. European deliveries begin early in 2017.