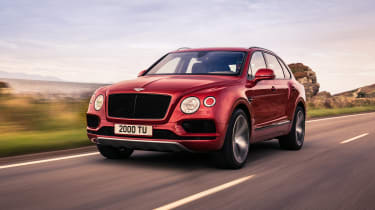 Bentley has released details of the next variant of its Bentayga SUV. Currently limited to W12 and V8 diesel forms, the new Bentayga V8 features the 4-litre twin-turbocharged V8 familiar from the Volkswagen group.

With a similar specification to the unit also found in the new Porsche Cayenne Turbo, the V8 petrol produces 542bhp and a huge 568lb ft of torque spread between 1950-4500rpm. Performance figures are not quite as strong as the more powerful W12 variant reaching 60mph in 4.4sec (0.4sec slower), with drive reaching all four wheels via an eight-speed ZF automatic gearbox.

> Click here for our full review of the Bentley Bentayga

The V8 itself is a new-generation 32-valve ‘hot-vee’ unit, with VAG’s complete arsenal of fuel saving tech like cylinder deactivation and pre-emptive start stop. The twin-scroll turbochargers sit between the cylinder banks in order to improve response, but also aid packaging underneath the Bentayga’s vast bonnet. 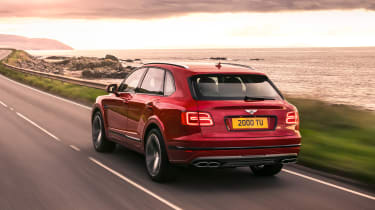 Poised to be the most dynamic Bentayga yet, the V8 petrol still tips the scales at 2395kg, 45kg and 116kg less than the W12 and diesel versions respectively, so don’t expect much in the way of Cayenne-rivalling handling capability on account of its considerable mass.

Available for the first time on a Bentayga is a new carbon-ceramic brake package, featuring officially the world’s largest front brake discs at a whopping 440mm, some 20mm more than the optional units available on the new Continental GT. These huge carbon-ceramic discs are gripped by ten-piston calipers and are the most powerful braking set up currently available in the Bentley range.

> Click here for our review of the new Porsche Cayenne Turbo 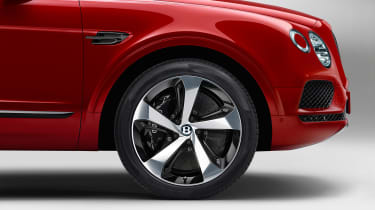 To help differentiate the Bentayga V8, the massive 22-inch wheel option is now available in a new two-tone black and silver finish and a new dark finish option for the brightwork. Otherwise the V8 Bentayga is as per the rest of the range, which is to say impeccably built and imposing, but lacking some of Bentley’s traditional sophistication.

Priced from £136,200, the new V8 petrol sits just above the current V8 diesel. But the Bentayga’s real reason for being is the extra appeal this V8 petrol model will have in the lucrative Chinese market, where cars with under 4-litre engines have significantly lowered tax rates applied. Available to order now, first deliveries will commence in early March this year.