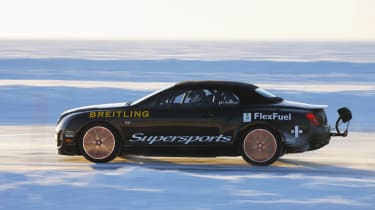 Bentley’s recent record breaker, the Continental Supersports Convertible that set a world ice speed record, will be at the 2011 Cholmondeley Pageant of Power. The car breached 205mph on the frozen Baltic Sea thanks to the dab hand of rally legend Juha Kankkunen (read more in evo Issue 156, on sale March 30). And it will be rubbing shoulders with some equally intriguing and evocative metal, such as the Martini-liveried Lancia Delta Integrale WRC car, at Cholmondeley in July. ‘The northern Goodwood’ takes place July 15 to 17, and much like its legendary southern contemporary, the event boasts a vast array of performance and racing cars and bikes, classic and modern, while helicopters, aerobatics, military combat displays, powerboats and hovercrafts also appear. If you’re similar to us, and like just about anything with an engine, you’re in luck. The 2010 Pageant attracted 50,000 visitors, winning ‘Best Tourist Event in Cheshire’. Despite its success, adult tickets for 2011 are set to cost from just £15. Click here for the official event website.