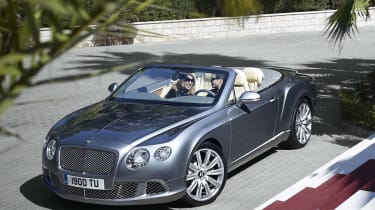 Bentley has announced that it will be updating the entire W12-powered Continental GT and GTC range with a new eight-speed automatic gearbox – recently announced alongside the incoming Continental GT Speed, which will also get the new gearbox.

The new close-ratio ‘box is built by German gearbox specialists ZF, and will replace the six-speed transmission in the outgoing models. Bentley claims that fuel economy and CO2 emissions on the GT have improved by 12%.

Performance will also see a mild improvement, dropping 0-60mph across the board. Times for the GT are down a tenth to 4.3secs and the GTC has benefited the most, now 0.3secs quicker at 4.4secs.

Deliveries of the first cars equipped with the new gearbox should start before the end of October.