Bentley has revealed the 202mph Continental GT Speed convertible, to be launched at the Detroit motor show 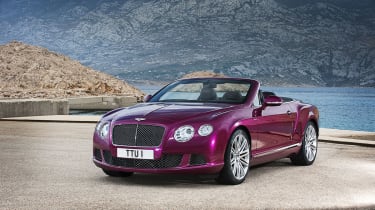 0-60mph is pegged at 4.1 seconds, compared to 4.0 for the Coupe, and as with the hardtop brother the addition of a new eight-speed ZF Automatic gearbox has significantly improved the car’s efficiency. Bentley claims that the Speed is capable of 19mpg and 347g/km of CO2, 15 percent better than the old car.

The chassis has been lowered by 10mm, which in conjunction with uprated bushes is said to improve the body control at speed, without compromising ride comfort. Visual changes include 21-inch alloy wheels, larger tailpipes, ‘Matrix’ grilles and the more-sporty Mulliner-spec interior as standard.

Under the bonnet the Speed gets a unique black inlet manifold, although externally very little has changed. A small lip spoiler on the bootlid the only added aerodynamic equipment, despite the extra performance.

Set to be unveiled at the Detroit motor show later this month, Bentley is yet to announce UK prices for the model.