How on earth is Bentley going to transform the two-ton Continental GT into a world-class racing car? Here’s how… 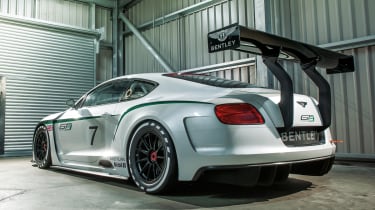 For a little while in September 2012, British manufacturers built a slice of our green and pleasant land in the centre of Paris. The Paris motor show was all about the Brits and specifically the new Jaguar F-type (still want that 911? Sorry, that’s a motoring-journalist tic I’ve been trying to shake off but it just keeps on cropping up when a new Jaguar is launched) and the quite extraordinary McLaren P1. One car to reinvent Jaguar, the other to reinvent the supercar almost in its entirety. It was enough to warm the cockles of an Englishman’s heart. And in Paris! Oh, the sweet irony.

I wasn’t in Paris for the unveilings, but I did monitor the whole event on Twitter and via an array of the biggest motoring websites. Don’t groan at the back there: it beats walking around sizzling exhibition halls, not quite being able to see the whole of any one car. Furthermore, it was an illuminating exercise, because the coverage and conversation built up along lines dictated by the users who were disseminating and commenting on their favourite news nuggets. Initially, the pre-show buzz was all #F-type this and #P1 that, but then on the eve of the show, Bentley revealed a GT3 racer based on the Continental GT Speed. And then a funny thing happened – the conversation about pretty much anything else stopped stone dead and enthusiasts the world over were clamouring to see more pictures and hear more information about Bentley’s huge endurance racer with the biggest wing this side of an Airbus A380.

It takes a very special racing car to steal a motor show and the Continental GT3 is that very special racing car. I mean, just look at it. Judging by the storm of approval on social media sites, it is already a people’s champion, but of course it will ultimately be judged on its competitiveness and race results. evo will be following the GT3 project’s progress from concept to racing reality throughout 2013 in a series of features. To start with, I meet Brian Gush, Bentley’s director of chassis, powertrain and motorsport, to talk about how the project is progressing and why he’s confident that the Continental GT really can make an unlikely race winner…

Gush joined Bentley in 2000 and created the motorsport department that ultimately went on to win Le Mans with the beautiful Speed 8 prototype in 2003. ‘Those three great years at Le Mans were exactly what the company needed to move on from the Arnage era to the Continental GT,’ he says. ‘In fact the programme culminated in the original GT launch. Ten years later, we have the second-generation Continental GT and it feels like the right time to return to the track. Our customers want us involved in motorsport and we’re petrolheads. Let’s just say we didn’t need to be asked twice…’

Once the decision was made to return to racing, it didn’t take long to choose the GT3 route, despite the fact that the class is a very different proposition from the prototype racing Bentley was involved in previously. ‘LMP1 was also considered, but it’s a very big-budget affair these days and we have two members of the group [Audi and Porsche] in that already,’ says Gush. ‘The next logical step was to look at GT3 with a road car-based project, which really gets back to Bentley’s roots anyway. In 1923, W.O. Bentley sent Frank Clement and John Duff off to the first Le Mans 24 Hours. They raced, drove back and then the development continued.’

It sounds like a marketing exercise from heaven, then, but when the world is watching it doesn’t matter how many ‘Bentley Boy’ analogies are drawn. Quite simply, the Conti GT needs to be competitive against McLaren 12Cs, Ferrari 458s, Aston V12 Vantages, SLS Mercs and Porsche 911s. So how will a four-wheel-drive, 2000kg+ luxury GT with its engine slung right over the front wheels be turned into a rear-wheel-drive, 1300kg race car to take on much smaller and more aerodynamic mid-engined machines? Gush knows it’s a big job but is also confident it can be done. ‘The weight came out of the car quite easily,’ he explains. ‘The basic steel monocoque remains standard in GT3 and our road car weight really comes from safety systems, luxury and the four-wheel drive. Of course, we have carbonfibre quarter panels and door skins here, which help.’

In order to create a level playing field between as many as ten different makes of GT3 car, the FIA holds an annual group test of all eligible machines (known as the Balance of Performance Test). Motorsport’s governing body then uses the results to adjust minimum weights and air restrictor sizes to even up the differences between cars. It reduces costs by removing the need to really push the development envelope.

‘One of the real attractions of GT3 is that the regulations have performance windows that you need to get into, but there is also a real drive to create a balance of performance,’ says Gush. Even so, it will still mean taking more than 1000kg out of the Bentley, which is some feat.

‘We need to get the car below 1300kg to give us some headroom to allow for any balance of performance modifications required, and we’ll do that,’ Gush continues. ‘And of course, our engines produce plenty of power and torque so that won’t be an issue.’

Notice the fact that he says ‘engines’. The car shown at Paris is officially called the ‘Concept Racer’ and is based around the new range-topping Speed version of the 6-litre W12 Continental GT. However, logic suggests that the smaller, lighter and more fuel-efficient 4-litre V8 from the entry-level Conti (tipped by Bentley insiders in evo 176) would be a better fit with endurance racing in mind. ‘Yes, the Concept has the W12 engine but we’re still evaluating whether we’ll go down the V8 or W12 route,’ says Gush. ‘Both engines have sufficient power and torque and, of course, fuel efficiency is a competitive factor that we must look at. At this stage no decision has been made.’

It seems difficult to believe that a GT3 race programme hoping to hit the track later this year still doesn’t have a final engine specification in mind. We’d bet on the V8, moved back 400mm and down 150mm in the chassis in accordance with GT3 rules. Given the choice, any race engineer would choose a smaller, lighter engine if power isn’t an issue, and with GT3 cars running 500-550bhp, the V8 will easily do the required numbers.

The bigger challenge, though, will be getting the correct aero balance. ‘We’re currently at the CFD [Computational Fluid Dynamics] stage and so we’re working with the best outside specialists we can find. Of course, everything we can do to improve aero efficiency will also reduce the size of the wake [the GT could create quite a tow for other cars on the long straights at Le Mans and Spa], have an effect on tyre management and make the car easier to drive for “gentlemen drivers” – all key requirements. We don’t want a car on a knife-edge.’

Bentley hasn’t just gone for outside suppliers for the CFD work. The car will be developed as a joint project between the new motorsport department at the factory in Crewe, and M-Sport, who are best known for running the works Ford WRC team from 1997 until the end of last year. It seems odd not to choose a partner with front-running endurance racing experience, but Gush is sure it’s the right choice: ‘They build the world’s best rally cars – which are extremely complex and highly technical machines – so they have the expertise to do it. They’re also a fresh partner in terms of track racing, and so we’re building together. Of course, they have a great facility [at Cockermouth in Cumbria] and a great depth of manufacturing knowledge, too. Between Crewe and M-Sport we’re almost completely self-sufficient.’

The programme isn’t run with rigid demarcation between M-Sport and Crewe, though. Bentley’s chief designer is down at M-Sport looking at suspension systems and its CAD experts are working with M-Sport, too. Many of the low-volume components will be produced by M-Sport but testing and prototyping is another shared responsibility, and interestingly, Bentley’s road car workforce is deeply involved in the project, too. ‘As we move through the programme we advertise internally for the expertise we need and people can step forward,’ explains Gush. ‘It’s a great boost for the guys in the factory and they all love cars and racing, so it brings real passion to the project.’

There’s still a huge amount of work to do before the Continental GT3 goes racing. The final design detail is still being set to determine technical partners for braking, transmission and various other components, but work has begun on the first development car. However, time is short because the car will roll out in the third quarter of 2013. Bentley won’t yet commit to a debut date but all signs point to the Spa 24 Hours on July 27/28. The race fits the Q3 timetable, and unlike GT3-only races, full factory teams are permitted.

We can’t wait to see and hear this thunderous Bentley mixing it with the established stars of GT3. It’s a fascinating class and with Porsche, Ferrari, Mercedes, McLaren, Aston Martin, Nissan, BMW and now Bentley involved, it makes LMP1 look dull and poorly supported. But will the Bentley be trundling around at the back or fighting at the front? ‘GT3 is a performance-balancing formula so we have to accept whatever restrictions are placed upon us,’ says Gush. ‘After that it’s about team efficiency, strategy and optimising the car. But, of course, we want to be challenging for podiums in year one. That has to be the aim. We’re not just doing this for fun.’