It's the big one, as the world's most exciting supercars do battle. It's Pagani Huayra versus Bugatti Veyron Vitesse 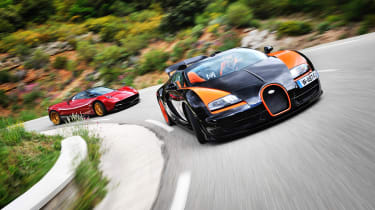 The specs are rather impressive but the battle looks a little one sided on paper. The Veyron drives all four wheels with an 8-litre quad-turbo W16 engine, which possesses gargantuan peaks of 1183bhp and 1106lb ft, enough for a 2.6sec 0-62 time and a 254mph top speed, the latter making it officially the world’s fastest convertible car.

In comparison, the Pagani Huayra uses a 6-litre V12 with just the two turbochargers, endowing its rear axle with 720bhp and 737lb ft of torque, enough to snare it a 3.3sec 0-62 time and a claimed 224mph top speed. Much smaller numbers, then, but at 1350kg it weighs a lot less than the 1990kg Bugatti, which should help its agility and handling no end. Its price looks similarly lightweight in this company, its circa-£1million cost paling next to the big Bug’s £1.7million price tag.

Enough of the numbers, though, what are they like to drive? The two supercar giants take each other on below in a world exclusive video. Bugatti Veyron or Pagani Huayra, which is best? There’s only one way to find out…

Read the full story and see more photos in evo 185, on sale now