The Bentley Continental GT3 race car made its European debut at the first round of the Blancpain endurance championship this weekend at Monza. Results here 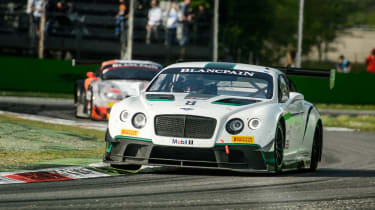 After the Bentley Continental GT3 racer made its debut in Abu Dhabi towards the end of last year, the company has made its first steps back into the world of motorsport at the first round of the Blancpain endurance championship.

Finishing 7th and 8th, the race was a success for both cars, which battled hard throughout the race. Car 7 recovered well, after driver Steven Kane (qualifying in fourth place) crashed the Bentley on his final lap of the session. After an overnight rebuild by the M-Sport race team, the car battled hard, just losing out to

Car number 8 battled up from 13th place on the grid to finish just behind its teammates in car 7. Treated as not just a race, but an extended test session, the team says it has learned a lot about the cars, and despite a solid effort – a number of things that can be improved on, however slightly.

Brian Gush, Bentley’s Director of Motorsport, commented: ‘This weekend has been a very good opening test of our cars and team. We’ve learnt a great deal and have many areas where we can make small improvements, but the whole team worked extremely hard and we’re very pleased with two top ten finishes in our first competition race.’