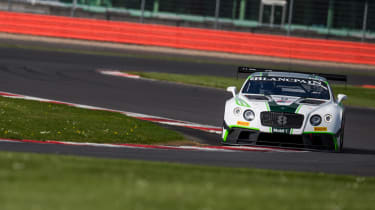 So while the Conti GT3 might not offer quite the pace of some of the competition, it also does without the knife-edge dynamics, and an adjustment in, say, ride height to compensate for wet conditions isn’t going to dramatically unsettle any amateurs climbing in for a stint. Watching it hammer through the fast right-hander at Copse corner, it’s easy to see what Soucek is talking about. The Bentley boys tend to let the car drift wider on exit than most of the other cars, and the speed they carry through the bend is pretty mesmeric in the context of the Conti’s supersized silhouette. That’s largely down to the front-end grip generated by the jutting front splitter and the car’s inherent stability. It moves about visibly on its tyres – all these cars do, it’s part of the endless appeal of GT3 racing – but it does so with a grace that belies its bulk. In full flight, this Conti is one of the most elegant racing cars I’ve ever watched live. 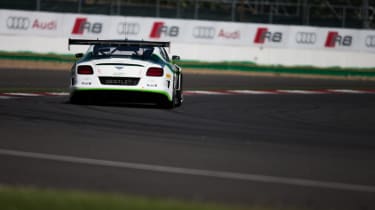 Just past the apex, those independent side-exit exhausts blow hard and everybody gets another face full of that heroic anthem. There are smiles and the odd chuckle – it's just that kind of car. What’s more, after a terrible start to this three-hour enduro, which involved an oil leak in the no.8 car and a Mercedes-administered spin for the no.7 car, the Bentleys are on a charge and are moving up the field. A late safety car puts a brief dampener on things, but the final 20 minutes are hectic, the cars running light on fuel and with tyres fast approaching oblivion. They’re travelling in tight echelons, close enough to see the carbon weave on one another’s bodywork in many cases, and I’ve been intently observing one of the Bentleys each time it thunders through Copse. In fact, I’m pretty sure it’s closing up the gap to the car in front. A McLaren 650S GT3, as it turns out.