Bentley has brought out a heavily revised version of the Continental GTC cabriolet with extra power, sharper handling and even more kit 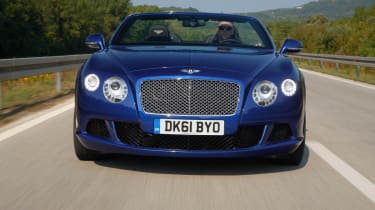 The replacement for the original Continental GTC that has been with us since 2006. It is 80 percent new or revised, so modifications may be subtle but they are extensive. Cosmetically it looks sharper with new creased edges on the bodysides, while inside there is now greater rear leg room and improvements to the ‘infotainment’ system. The swathes of lavish wood and leather remain.

The track is now 40mm wider, there are new suspension uprights, the torque split of the four-wheel drive system has moved from 50:50 to a 60:40 rearward bias, the W12 motor now has a little more power and torque and overall the weight has dropped 70kg, although when the car tips the scales at almost 2.5 tons, this is almost negligible.

It already had the stiffest chassis of any four-wheel drive convertible in the world and the roof is so good it rivals the coupe for refinement. There’s no getting away from the mass, but it has a level of agility that still surprises. It covers the ground swiftly and effortlessly, Bentley claim 4.5 seconds to 60mph, but it doesn’t feel that quick simply because there’s no drama, no fuss. The revised steering and suspension allow greater control than before.

There’s a new satnav that incorporates Google maps and the GTC now comes on 20-inch wheels as standard. A range of 21s are available, and as you might expect the options list is both expensive - and extensive.

It’s a very different car to rivals such as the Ferrari California and Aston Martin DB9. It can out do both when it comes to class and opulence. It has so much refinement we reckon it’s more compelling package than the Continental GT.

The Bentley Continental GTC is available now for £149,350