The 2013 model year Continental GT Speed is the fastest production car Bentley has ever made. We drive it 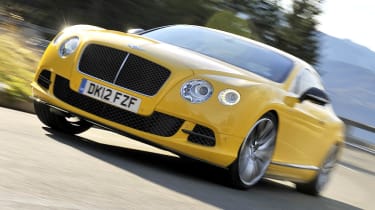 What is it? The new Continental GT Speed, and the fastest production Bentley ever. It will reach 205mph, and I know this not just because I read it on the spec sheet, but because at approximately 1.00am on an Autobahn south-east of Munich I saw those exact digits tick over on the digital display in front of me. Technical highlights? The Speed boasts upgrades of 49bhp and 74lb ft of torque over the standard W12 car, taking the overall figures to 616bhp and 590lb ft respectively – very healthy, especially given that maximum torque is available from just 2000rpm and doesn’t tail off until after 4000rpm. For the first time, the W12 is mated to an eight-speed ZF auto gearbox, and as well as enabling that augmented top speed, the 0-60mph time has also been reduced to a mere 4.0sec and the 0-100mph dash to just 9.0sec – mighty impressive for a car weighing in at a robust 2320kg. Chassis-wise, the Speed has the new Conti GT’s 40/60 front/rear torque split (which replaces the 50/50 split of the old model), while the air suspension has been given stiffer springs, dampers and bushes as well as a ride height drop of 10mm and uprated anti-roll bars. What’s it like to drive?  We spend quite some time on roads just south of Salzburg (overlooked by the Eagle’s Nest, no less). Constantly twisting tightly, these are not the Speed’s forte, but it deals with them remarkably well and even though there’s a lack of any real steering feel, it’s obvious that the torque split does improve the overall balance of the car. You could even consider cajoling it into some form of hooliganism if you had some space. Luxembourg would be about the right size. The new eight-speed ’box might sound like an odd fit with a car that has such deep wells of torque to draw on, but it has such a smart, snappy change between ratios that you really do appreciate the extra sparkle it brings to the drivetrain. An exhaust re-tune is also very welcome, the rich bass-baritone making its woofly presence known without ever intruding. Ultimately, however, the GT Speed cannot disguise the fact that it is a two-ton car with 12 cylinders slung out ahead of the front axle, and there is a strong sense of inertia when pushing on.  No, the clue to the GT Speed’s natural habitat is in its name, a Gran Turismo built for speed, which is why we took the trouble to go out at night and find that quiet stretch of three-lane Autobahn on which to stretch its legs.  How does it compare? The Continental GT Speed’s £151,000 price tag pitches it against the new Aston Martin DB9 (£131,995) or Mercedes CL65 AMG (£164,780) though if it’s speed and performance you crave, the BMW M6 and Nissan GT-R are both 2+2s, fantastic to drive and sit comfortably below £100,000. They can’t touch the Bentley for pure luxury, of course. Anything else I need to know? You might think that the Speed is a bit of a niche model, but in actual fact it accounted for around half the sales of the old Conti GT. It seems that if people are buying a Bentley, they want the best.