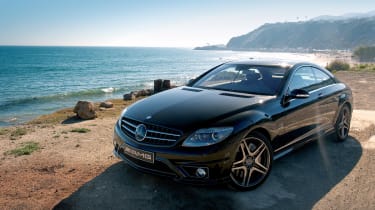 AMG has launched so many 500 or 600bhp cars in the past few years that it’s easy to get blasé about those numbers. I’ve been guilty of it myself; even as I jumped into the CL I felt rather disinterested, almost bored before I’d experienced it. Wafting through an American cityscape, isolated and in the kind of insipid luxury that is unique to big German cars, I hardly cared if I drove it another yard.

And then I opened the 6-litre twin-turbo V12’s taps and the CL65 slapped me around the face with a shocking reminder of what 603bhp and 737lb ft actually means. It means that two tons becomes irrelevant, it means that time and space are elastic concepts rather than hard and fast rules, it means that for once you thank the gods of ESP for keeping you on the road. It means you’re going to have a good time.

Ludicrous is perhaps the best way to describe the CL65’s performance. Ludicrous and wonderful. And when you’ve thrown off your prejudices about the huge coupe, you begin to realise that the lunatic engine, although the main event, is far from the only attraction. The steering is light and lacks real textural feedback, but the front wheels respond to your demands with a nice linearity and the CL really bites into corners.

Select the ‘Sport’ mode for the Active Body Control suspension (simultaneously cutting the gearshift speed by 30 per cent) and the CL’s body control is surreal. There’s minuscule roll, no dive under braking and even the huge torque of the engine fails to upset the coupe’s equilibrium. The ride is excellent, too.

The CL makes do with just five ratios for its automatic gearbox (the CL63 AMG has seven), but the shift is wonderfully smooth in both auto or when manually operated via the steering-wheel mounted shifters, and there’s so much power that there’s never any question of a hole in the delivery. In fact the power is immense, the rear tyres often at a loss as to what to do with all the torque, yellow ESP triangle flashing on the dash, the sound of fleeting stabs of wheelspin fizzing through to the leather-lined interior.

It would be easy to make a damning indictment of the CL65 AMG. It’s too fast for the road (unless you happen to have miles of derestricted autobahn on your doorstep), too heavy and luxurious for the track, and at £149,565 it is hugely expensive. The CL500 is much easier to justify. Even the 518bhp CL63 AMG – a snip at £103,552 – makes more sense. But if a Bentley Conti GT is too common for you, a puffed-up SUV too offensive and a supercar just too much hassle, then the bombastic, serene CL65 AMG might just tick all the boxes.