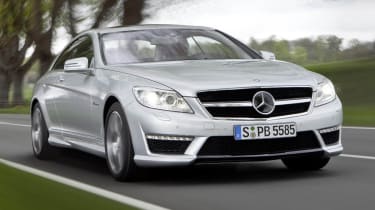 The second most potent version of Merc’s huge S-Class-based flagship coupe, though its new generation 5.5-litre V8, which supplants the naturally-aspirated 6.2-litre of the previous ‘63’ model, boasts twin blowers like the V12 of the CL65 AMG and similar neck-bending acceleration up to not-so-sane speeds, especially if you order the output-massaging Performance Pack.

Obviously the engine, though the CL range has just been treated to a mid-life spruce-up including restyled headlamps and grille and shapelier bumpers and bonnet. In standard form, the new twin-turbo 5.5-litre V8 delivers 536bhp at 5500rpm and 590lb ft at 2000rpm – that’s 18bhp and 126lb ft more than its larger-capacity, unblown predecessor. The Performance Pack swells these outputs to a still more impressive 563bhp and 633lb ft. Marshalling all this brute force to the rear wheels is AMG’s own seven-speed MCT (multi-clutch transmission) which sharpens up shift times compared to the old 63’s seven-speed torque converter auto. AMG claims the new CL63 hits 62mph from rest in just 4.5sec with top speed limited to 155mph. With the Performance Pack, the limiter is reset at 186mph and 0-62mph drops to 4.4sec.

The new motor is simply magnificent, retaining the response and sonic drama of the naturally aspirated 6.2 – subjectively there’s no turbo lag at all – with a broader, more linear powerband. The bi-turbo V8 doesn’t have quite the top-end freedom and bite of the 6.2 but it more than makes up for it with oodles of low-down and mid-range wallop that meshes seamlessly with the rapid-shifting MCT to provide instant on-demand thrust and stunning overtaking ability.

As with the S-Class, the CL’s ABC (Merc’s active body control system) now also compensates for crosswinds but its basic task of keeping body movements in check seems much more aggressively implemented than it is on the S. While it helps the CL deftly disguise its two-ton bulk – it turns in more alertly than the S63 and body control is exemplary, especially at speed – secondary ride comfort suffers. Its suspension isn’t quite as busy as a Jaguar XJ’s over broken and lumpy surfaces, but even on its Comfort setting, it lacks the graceful suppleness of the S-Class in Sport mode. You could call it more sporting, but the S63 feels more fluent and poised.

The hottest CLs have seldom been eclipsed for raw pace or sheer all-round competence, but neither have they won any beauty contests or been able to match the charisma, excitement and sense of involvement conjured up by the best rivals. The recently refreshed Aston DB9 and Bentley Continental GT won’t make life any easier for the CL63 but arguably, it does now have the best engine of the lot.