AMG gets its hands on the striking new CL coupe 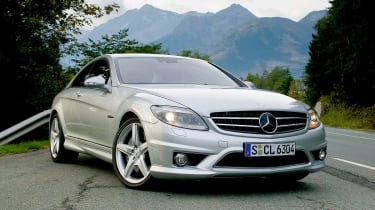 The seventh AMG model to receive the new high-revving, normally-aspirated V8 engine, the CL63 should be a compelling machine, but ’63 Fatigue’ means it’s hard not to approach the range-topping CL with a certain reticence.

Can you really be blasé about a full four-seat coupe boasting 525bhp and 465lb ft of torque? You can, but not for long. Think about it. This is the most powerful version of AMG’s in-house designed, hand-built V8 yet seen, thanks to management system tweaks and the power-boosting benefits of a longer exhaust system, which enables the V8 to breathe more effectively. A few years ago this would have put the CL deep into supercar territory.

The result of AMG’s work is a two-ton-plus luxury coupe that can hit 62mph in a fraction over 4.5sec and run into its 155mph electronic speed limiter with absurd ease. It’s a vocal engine, and one that needs revs to deliver its best. Customers accustomed to the gruntfest that was the old supercharged 5.5-litre V8 may find the new engine lacks its instant, thumping torque, but it remains an absurdly potent device. Mercedes doesn’t quote an unrestricted top speed, but there’s little doubt it would touch 200mph.

The CL’s styling makes as big a statement as its performance, with an aggressive, leering face dominated by the frowning headlights and toothy grille. With a clean, arcing roofline, accentuated by a confident swage-line sculpted into the curvy flanks, the CL disguises its saloon origins, and therefore its bulk, well. That is until you see the CL amongst normal traffic, at which point its epic scale becomes gloriously apparent.

In keeping with the CL’s unlikely role of hushed cruiser and bruising high-performance coupe, you can switch from ‘Comfort’ to ‘Sport’ and ‘Manual’ modes, which reduce the shift speed by 30 per cent and 50 per cent respectively, not to mention progressively tensing the CL’s suspension.

Like the S-class, the CL is far more entertaining than you’d ever imagine. There’s no denying it’s a huge car, but quick, direct steering and good visibility make it easy to place, while minimal body- roll and generous grip levels enable you to pile into corners with real commitment. Fast curves are its real forté, with confidence-inspiring turn-in and a rock-steady stance. Of course, with state-of-the-art stability and traction control systems, you’ve always got a reassuring and highly effective safety net, but unless you really decide to take a liberty, you rarely sense the electronics intervening.

Tighter corners are a tougher test, and although you can send the CL into the early stages of lurchy understeer or smoky oversteer with an excess of enthusiasm, drive the CL with smoothness and sympathy and it remains surprisingly tidy and impressively agile. You can’t fully disengage the stability system, but pressing the switch does peel away a few layers of intervention. Frustratingly, while it reveals enough of the CL’s ability to know it would be hilariously throttle-steerable, electronics gather things up before the fun can really begin.

Should you want one? Well, as a big, imposing, statement coupe the CL63 has few peers. It would surely make a mighty long-distance partner, and its comprehensive levels of equipment and supreme comfort would take the sting out of the cruellest city commute. With four decent seats, there’s space to carry family or friends (although not perhaps as much rear legroom as you’d expect), while AMG’s influence on the dynamics makes it an entertaining steer when you’re driving solo. If that ticks your boxes, the CL63 is a compelling proposition.