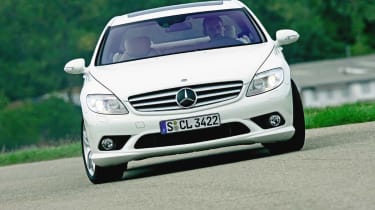 Mercedes’ stated aim with the new CL was to build ‘the best luxury coupe in the world’ – what else? – though with cars like the Bentley Continental GT and Aston DB9 now vying for buyers, it certainly needs to make its flagship coupe special. Two models are available in mainland Europe now, the CL500, powered by a 5.5-litre V8, and the CL600 with the 5.5-litre biturbo V12, both engines delivering more power than before.

Fractionally longer, wider and taller than the old model, the new CL manages to appear both smaller and, to my eyes, more handsome, with hints of CLS. Optional five-spoke AMG alloys set it off nicely, though the full AMG version, the CL63, will probably be available by the time the CL goes on sale in the UK next March.

The last CL500 had just over 300bhp but the new car has no less than 383bhp and the enhanced V8 is now coupled to a seven-speed auto. The engine is virtually inaudible at city speeds, adding to excellent overall refinement. Ask it to work harder and a wonderfully creamy pulse filters through and, despite hauling almost two tons, it pushes the CL along with satisfying urgency. The auto ’box shifts superbly, though for ultimate control it’s preferable to use the wheel-mounted buttons and self-select the gears.

Like the CL600, the 500 features a revised version of ABC (active body control) which reduces the amount of roll in cornering even more and also brings the comfort and sport settings closer together. The uncanny way the CL refuses to dive under braking and stays almost totally flat whatever the cornering speed is impressive, yet there’s an almost total absence of feedback through the half-timbered wheel. The steering is quick-witted and comfortably weighted at speed but it’s your eyes and the sound of the tyres squealing that let you know you’re pushing hard enough to induce understeer. Disengage the subtly effective ESP and the rear will eventually fall into oversteer powering hard out of tight turns but the chassis doesn’t communicate this lucidly. The brakes, although strong, are blighted by a pedal that is fine on light applications but feels spongy when you press hard.

Much of this would be more acceptable if dynamic precision and feedback had been sacrificed for outstanding ride quality, yet you can hear the wheels thump over broken town asphalt while poor surfaces and sharp bumps taken at speed have them shimmying in their arches.

The CL600 is much the same, only with gob-smackingly urgent pace. Its 505bhp biturbo V12 delivers 612lb ft of torque from just 1900rpm (the V8 boasts 381lb ft from 2800rpm), so having just five gears doesn’t inhibit its acceleration. It weighs 190kg more than the 500 and, given that its nose pushes wide more readily, you’d guess most of the extra mass was under the bonnet.

Previous CLs have introduced innovations such as ESP stability control and ABC roll-suppressing suspension. The new CL also innovates, though ‘Distronic Plus’, a £1235 option in the UK, is clever but of less obvious value. This radar-based system features ‘pre-safe brake’ which alerts an inattentive driver to the fact that they are about to rear-end the car in front. A shrill audible warning sounds 2.6sec from impact and, if no action is taken, a second later the CL applies moderate braking. Hopefully jolted into action, the driver then hits the brake pedal, benefits from ‘brake assist’, which delivers full power braking, and thus the CL either pulls up short or can be steered around the car.

At £106,995, the CL600 is vastly more expensive than the CL500 (£79,550), for which you get a higher spec, including soft leather on virtually every interior surface, keyless go and a top-line audio system and digital TV, plus, of course, the extra pace of the V12. It’s no bargain though – both the DB9 and Conti GT feel more special – and the CL500 is the smarter choice.