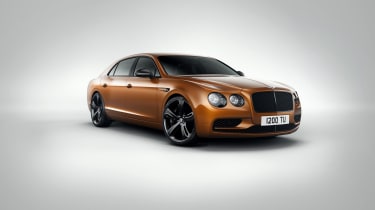 Described by Bentley CEO Wolfgang Dürheimer as ‘the ultimate luxury performance sedan’, tweaks to the 6-litre W12 have seen output climb to 626bhp and torque to 605lb ft, the latter developed by the time the crank is spinning at 2000rpm.

That’s trimmed the regular W12’s 0-62mph time down from 4.6sec to 4.5sec (it’ll hit 60mph on the dot in 4.2sec), while top speed increases from 199mph to 202mph. Not enough that you’d notice the difference perhaps, but undoubtedly impressive from a car that creaks through a weighbridge at 2475kg in non-S trim.

Power goes to all four wheels with 60 per cent of the engine’s torque being sent to the rear pair. S models also get a dedicated suspension setup for improved handling and traction, and damper and stability control settings have also been tuned to suit. Bentley claims ride quality is still suitable for those who wish to be driven, rather than driving themselves. 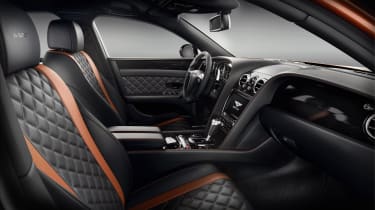 With extra speed on the cards Bentley has also seen fit to offer carbon ceramic brakes as an option. We’ve tried them in the (even heavier) Mulsanne Speed, where they managed to haul the car down, with reassuring feel, from faintly ridiculous velocities.

The Flying Spur W12 S has also received some visual alterations to differentiate it from its stablemates. Chief among these is the deletion of almost all the Spur’s chrome trim, replaced by gloss black elements. The wheels too – either 21in 7-spoke or 21in 5-spokers – are gloss black, and the front and rear lights also receive a dark tint.

Inside there’s an engine-turned finish to the facia panels and door trim panels (with satin-finish carbonfibre an option), as well as W12 S logos stitched into the headrests and embossed into the sill plates. Bentley’s usual wide range of personalisation options is present and correct. 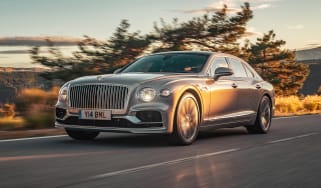