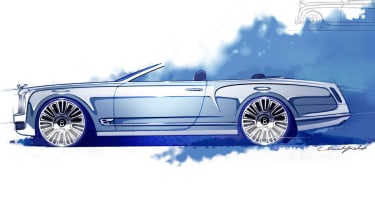 Bentley used the 2012 Pebble Beach Concours d’Elegance to host a private preview of its new Mulsanne Convertible Concept to a handful of US customers and selected media, including evo. As the design sketches – and it’s fairly self-explanatory name – no doubt tell you, it’s a drop-top version of the mighty Mulsanne saloon, and a modern day interpretation of the Bentley Azure, whose name might well carry on, should Bentley decide to build it (which we’re sure they will).

There are no firm technical details yet – this was simply a clinic session based around a modified Mulsanne mule – but it’s a safe bet that the production version will use the same 6.75-litre twin-turbo V8 engine as its four-door base car. Its 505bhp and frankly silly 752lb ft of torque are good for 0-60mph in 5.1sec and a 184mph top speed in the standard Mulsanne, despite its 2.5-ton kerb weight.

Bentley looked briefly at using a folding hard-top on this car but due to the packaging difficulties, decided to go for a soft-top instead. 150mm has been chopped from the wheelbase of the standard Mulsanne (now 3.05 metres), while the windscreen has been chopped down, making it 25mm lower than on the standard car. But at 2m wide and 5.35m long, this is still a very big four-seat convertible and is near identical in size to the Rolls-Royce Phantom Drophead Coupe, which the production Mulsanne Convertible will be a direct rival to. It will possess a similar, £250,000-plus price tag too, considerably more once a few options have been ticked.

Most Bentley Azures were sold in North America, which explains the initial reveal of its Mulsanne successor at Pebble Beach. But China is expected to be a big market for this car too, as will be the UAE countries. Bentley expects modest total sales of around 250 cars a year. It hasn’t yet revealed when we’ll see the production version but should the responses to the clinic prove favourable, then we’d expect it to reach the market late in 2014.

What might be of more interest is that Bentley is also considering a Coupe version of this Mulsanne Convertible, which will be much more sporty and will echo the great two-door Bentleys of the past like the mighty 420bhp Continental T that went out of production in 2003. Let’s hope it happens.