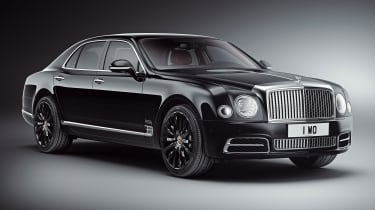 Bentley has revealed the limited-edition Mulsanne W.O. Edition to celebrate its 100th birthday and honour company founder, Walter Owen Bentley. 100 will be built, with deliveries commencing in 2019 following the car’s public debut at Pebble Beach Concours d’Elegance in August.

Bentley’s internal coachbuilder, Mulliner, has designed the W.O. with almost a century’s worth of Bentley history in mind, with particular influence drawn from the 1930s, when Walter delivered his final project – the 8-litre. Buyers can opt for the W.O. package on any of the three Mulsanne derivatives currently offered.

A section of the crankshaft from Walter’s personal car is incorporated into the armrest, which doubles as a cocktail cabinet, with a machined display case. Below it is an inscription explaining the origin of the component taken from the 8-litre, which itself is visually recreated, using various materials, on top of the armest.

Continuing the Mulsanne's extravagance are the various leather hides and high-quality materials which trim the interior. The wood dash features the founder's signature, which is also displayed on the front bumper, while there’s centenary badging located on the sills and wheel centres.

The Bentley Mulsanne W.O. Edition borrows its colour scheme from the 8-litre. So, it’s black-on-black with plenty of chrome trim in the shape of the radiator shell, grille and the bonnet strip. However, customers can of course choose their own colour scheme.

Bentley is yet to divulge a price for the Mulsanne W.O. Edition.