Return of the BMW M1

The BMW M1 name returns, but will it appear on a hot 1-series or a new supercar? 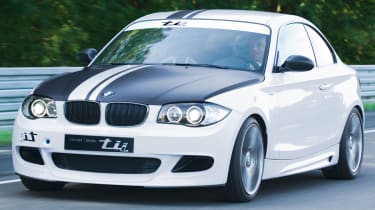 BMW has confirmed it is to build an M1 – although the badge could be worn by one of two models currently under development. First up is a baby M-car, but many within BMW would love the name to appear on the rump of an Mercedes SLS AMG-rivalling supercar instead.

M Division’s priority is a sub-M3 model based on the 1-series and using a heavily-tweaked version of the 135i’s twin-turbo straight-six producing around 400bhp and 370lb ft of torque. This will be mated to the new seven-speed double-clutch gearbox and is likely to drive the rear wheels through the M3’s trick differential.

Well-placed BMW sources predict that other M-car features are likely, including the M3’s complete suspension, while to further boost its cred the engineers are working to remove 70kg from the 135i’s pudgy 1485kg kerb weight.

Visually, expect the little M to be closely based on the Tii concept car BMW displayed at the 2007 Tokyo motor show, with enlarged front air intakes and a less subtle bootlid lip.

Expect the new model to go on sale as soon as early 2011. As for the price, our source added: ‘If you look at M3 and 135i, there’s a lot of space for pricing. We’re thinking about half way between them.’

The trickiest decision could be on the name, though. We understand  that BMW’s ‘old guard’ have problems with a 1-series wearing the M1 badge because of the original they developed in the 1970s. They would prefer the name to be held back until the arrival of a latter-day replacement for the 1978 mid-engined supercar, and that’s a project that M Division is now actively working on. See the M1 Homage concept here.

In a sharp departure from the past, it is believed that this new supercar, due in late 2012, will use both electric and high-revving petrol motors to achieve sub-4sec 0-60mph performance. The drivetrain is said to take lessons from the Vision EfficientDynamics hybrid (above) revealed at this year’s Frankfurt motor show, mating BMW’s twin-turbo 4.4-litre V8 with twin electric motors. The new car would use this system to provide added boost at low rpm before swinging across to petrol power at higher revs, much like the X6 ActiveHybrid does.

‘M Division should have its own supercar built in three years,’ a senior BMW source said, ‘but we need to sell some cars first. That’s why the 1-series M-car is the higher priority.’

Click here to read about the BMW 1-series Tii concept