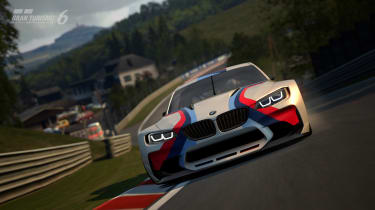 BMW has created an extreme racing version of its M235i that we can all have a go in. Called the BMW Vision Gran Turismo, it follows in the footsteps of the Mercedes Vision Gran Turismo as being available to download and virtually raced on the Gran Turismo 6 video game on the Playstation 3.

Unlike the futuristic Mercedes creation however, the BMW instead takes a far more grounded approach. Based on the M235i road car, it features a highly modified version of the twin-turbocharged straight-six engine to produce a substantial 541bhp and 501lb ft of torque, placing it in line with the fastest DTM racecars of today.

A paddle operated six-speed sequential ‘box is joined by front and rear wings, 50:50 weight distribution, carbon-fibre bodywork and a skinny 1180kg kerb weight to ensure the virtual machine is worthy of its racing car title. Keeping the car in line with tradition, M colours are stretched across the aero-focused body much like BMW’s racers of the 1970s.

Despite only being available in virtual form, it does seem as though making the car could be feasible due to its readily available components and realistic driving dynamics. But without demand for such a machine, it looks as though the BMW Vision Gran Turismo is to be restricted to the realms of virtual simulation. It’ll be available to virtually drive at BMW Welt in Munich before it then becomes available to download on the PS3.