Original wheels are fine, but would some BMW Performance items be even better on our 135i? 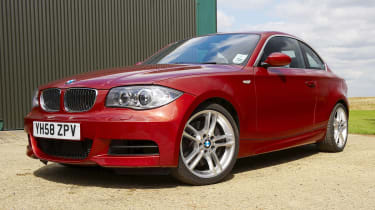 A peek inside the huge box parked in the mirrored foyer of the evo offices revealed that the first parts for the 135i had arrived: four new alloys. At first glance they looked more like the originals than I expected, but once we’d got them on the car there was a definite improvement – they look sharper, and so does the car, which just shows how important wheel design is.

They’re not cheap, though, costing over £2500 with tyres. Rims and rubber are both the same sizes as before, too, but this ‘313’ wheel is the lighter of the two designs offered in the BMW Performance brochure by almost a kilo, so promised to help the 135’s dynamics by reducing unsprung weight.

However, according to our scales they’re just 0.5kg per unit lighter than our car’s old wheels (the original tyres were well worn, but that would make them only a fraction lighter), and the truth is that the 135i drives pretty much as before. Any subtle changes – is the ride a fraction less harsh? – could be down to the tyres, which are now run-flat Dunlops rather than run-flat Bridgestones. We had wanted to try conventional tyres, but experts we spoke to advised us that the suspension wouldn’t work well with them, the run-flats’ extreme sidewall stiffness having been factored into the set-up.

Oh, incidentally, before the change a nail went through a rear Bridgestone in Wales but we were able to drive around and then home, exactly as intended.