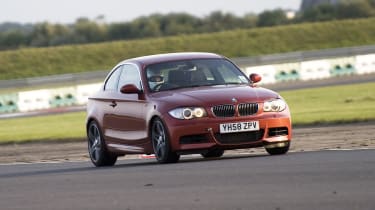 It was a week or two after the BMW Performance suspension kit was fitted that we found time to get over to the Bedford Autodrome and put in a lap or three on the West Circuit. Marriage and Catchpole had had the car for most of that time and both had enjoyed it. ‘Feels really good now, doesn’t it?’ said Catchpole. Indeed it does; less fuzzy, more poised. Looks good, too, with the slight ride-height drop. And so it should for an all-in, dealer-fitted cost of £2500.

It was a similar day to when we ran the standard car around – warm and dry – and it felt better, more stable, more decisive, more biddable, mostly through there being noticeably less roll. However, when the VBOX flashed up the time for the second flying lap, it was clear we were going to struggle to go faster than the stock car. The third and best lap was a 1.29.4 – some way off the benchmark 1.28.7.

There’s no stand-out area where the lap speed has changed, it’s just a fraction here and there. It could be that the run-flat Dunlop SP Sport 01s are a fraction less good around the track than the original run-flat Bridgestone RE050As, perhaps because being newer their tread depth is deeper. Whatever, there are two certainties. The first is that after spending £5000 upgrading the wheels and the suspension, we have not improved the 135i’s lap time. The second is that we have improved the feel of the car, on road and track; wheel control is better and the car drives more positively.

Stage three is the engine upgrade, which should improve throttle response, mid-range punch and add a little to the top end. After that, we plan to replace the run-flats with trackday tyres. The target is still the M3’s 1.25.9. Stay tuned.