Front-wheel-drive 1-series gets sharpened into a Golf GTI rival, and gains the iconic Turismo Internationale badge

BMW’s first front-wheel-drive 1-series caused quite the controversy when it was revealed last year, but amongst the uproar from diehards it has given BMW a chance to do something it’s never done before – engineer a direct rival to traditional front-wheel-drive hot hatchbacks such as the Volkswagen Golf GTI and Ford Focus ST. The new 128ti has been designed to do just that, while also bringing the ‘Touring Internationale’ badge back from the dead.

Of course there’s already a hot version of BMW’s hatchback in the form of the M135i, but its all-wheel-drive system and focus towards the upper end of the market, to rival the Audi S3 and Mercedes-AMG A35, has left enough of a gap below, says BMW, for something a little harder, lighter and more aggressive. 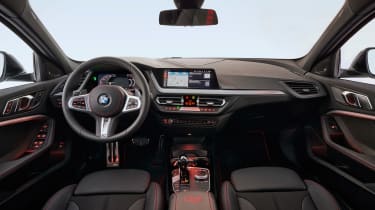 That’s where this new 128ti comes in, with a slightly detuned version of the M135i’s B48 four-cylinder engine, a redeveloped chassis and subtle yet still noticeable design flourishes bundled into an aggressively priced £32,995 package in the UK – £2700 less than the M135i and a substantial £1965 less than a DSG-equipped Volkswagen Golf GTI.

The biggest difference between the M135i and the 128ti is the omission of the rear driveshafts and differential for the latter car. The front-drive-only set-up retains the front-axle-mounted Torsen limited slip diff, however, which will be especially useful to contain the B48 engine’s substantial torque curve low down in the rev range. The engine is rated at 261bhp – 19bhp more than an equivalent Mk8 Golf GTI and 41bhp down on the M135i – with a peak torque rating of 295lb ft between 1750rpm and 4500rpm, which is 37lb ft down on the M Performance model. 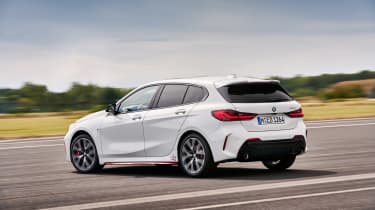 Unfortunately, counter to its simplified mantra, BMW will not offer a manual transmission on the 128ti, instead the only option is the Aisin eight-speed torque converter as in the M135i. This decision was driven by an apparent lack of customer demand but also, more pertinently, the need for a low CO2 rating that is difficult to achieve with only six ratios. In order to keep modern performance cars on the right side of emissions regulations, manual transmissions need to have extremely long gear ratios, which is not an option BMW’s engineers wanted to take. 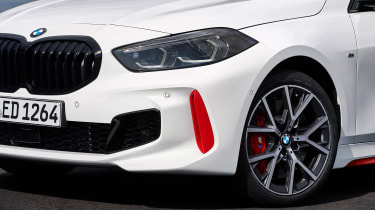 The 128ti puts a heavy focus on handling, though, BMW’s engineers adjusting the car’s overall balance to have a more playful demeanour than the M135i. They’ve done this in part by slightly reducing chassis rigidity, replacing the M135i’s shear panel for a weaker unit to encourage a more neutral handling balance, assisted by a new passive damper set-up. The standard wheel and tyre package uses 18-inch rims (19s are optional) and the brakes are carried over wholesale from the M135i.

The 128ti is only subtly different visually compared to lesser 1s, with bespoke wheels, red detailing on the sills, air curtains and brake calipers, and darkened lighting lenses front and rear. Inside, the same theme has been applied, with liberal applications of red stitching on the seats, doors and (plastic) dash.

Perhaps the most exciting thing about the 128ti is the almost skunkworks-like feeling of this new model, it finally exercising the 1-series’s UKL chassis to its fullest potential rather than chasing numbers set by rivals from other German manufacturers. Add to this its arrival in the UK with such an impressive price point and this could well be the performance 1-series we’ve been waiting for. 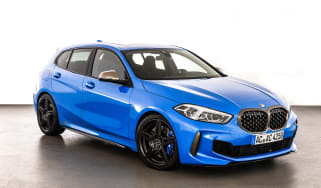