The Golf R defined the business class hot hatch, but has the new AMG A35 taught the VW a thing or two in its golden years? 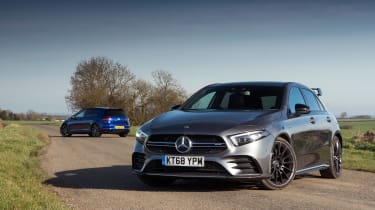 There’s a long-standing trope of motoring journalism that the best car in the world is something like a diesel 3-series. You know the gist: it does all the normal day-to-day stuff such as carrying a family of four and not using much fuel and having a proper boot, but it isn’t totally dreary to drive, offers more performance than most people will realistically ever use and isn’t priced on a par with a ticket to Mars.

Well, I’ve got a better suggestion: the Volkswagen Golf R. Think about it. It’s a Golf, which automatically makes it one of the most sensible, real-world cars on sale today. Ludicrously generous finance packages have made it quite affordable. And come rain or shine, it’s at once surefooted, quick and, in that way the best hot hatchbacks have always been, capable of giving much more exotic cars than itself a hard time down a twisty road. 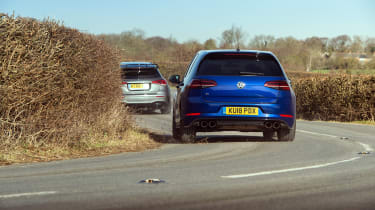 Why then have I always found it a bit… tedious? Well, because it’s a Golf. A great car, of course, but like a politician trying to appeal to everyone and ending up achieving nothing for anyone, the Golf R’s middle-of-the-roadishness leaves it at risk of attack from cars with more focus on individual targets. Give me the touring-car feel of a Civic Type R or the underdog spirit of an i30 N any day.

Perhaps it’s a chink in the armour that the new Mercedes-AMG A35 can exploit too. The blunt old 376bhp A45 couldn’t, despite bowing out as the most powerful four-cylinder hatchback on sale. There’ll be a new one along shortly, with 400bhp or so (a figure the next-gen Golf R is likely to target), but in the meantime AMG’s current two-tier strategy means the lesser of its hot hatches is pitched pretty much bob-on with the hottest Golf. 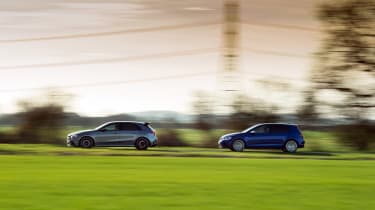 Take their engines. Two litres both, around 300 horsepower apiece (the A35 edges the Golf by six horses with 302bhp) and exactly 295lb ft of torque each (the VW’s available from 2000rpm compared to 3000rpm for the Merc). Each uses a dual-clutch transmission with seven speeds, and each sends its power to all four wheels, although 105kg separates their kerb weights, the Golf being the trimmer of the two at 1450kg.

Elsewhere there’s greater divergence. In unadorned form the AMG is nearly as subtle as the R, with only larger front intakes, a kicked-up rear spoiler and an unconvincing diffuser giving the game away that this is more than just a basic A-class model; even the five-spoke alloys are relatively low-key. Our test car, though, wears the £2595 AMG Style Package, whose 19-inch multi-spoke alloys, and canards, skirts and free-standing wing suggest its designers walked past the AMG GT R department at Affalterbach each morning. 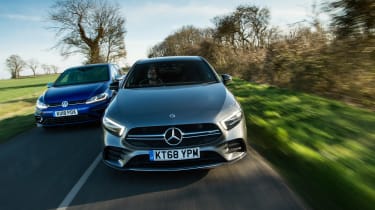 The Golf, by contrast, is a model of restraint, with little official scope for pepping things up either. The cabin is even more nondescript than the exterior, and is slightly disappointing not for its quality, which is typically VW solid, but for being less vibrant and interesting than the driving environment of the cheaper, tartan-trimmed GTI.

The Merc’s innards, on the other hand, look barmy on first inspection. I’m tempted to knock the A35 down a half star right away for its cheerless shades-of-grey aesthetic, and another half because, despite this car being the current A-class range-topper, you still need to spend £2395 to upgrade the pair of screens behind the black dash panel from 7-inch items to 10 inchers for the full widescreen effect. But in reality, the A35’s cockpit feels more special than anything else in its class, and while user-experience folks I know could (and do) despair at the hotchpotch of menus and graphics on display (there are four instrument cluster themes available, none of which has the clarity of those in the Golf), Mercedes has sensibly offered physical controls for most inputs. 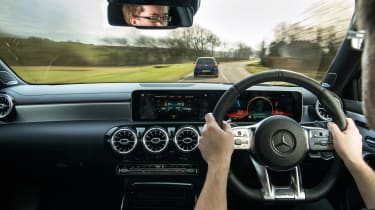 Where there are more complex methods of operation available – such as speech recognition – it works genuinely well. You’ll probably think less of me when I say this, but I get a kick out of saying out loud ‘Mercedes, I’m cold’ and the car automatically bumping up the climate control by a few degrees, or ‘Mercedes, tell me a joke’ and being politely denied because the car is German.

Of course, each company has got the important stuff right, even if their approaches to design and the user interface differ. Seats in both cars  are comfortable and supportive, visibility in each is good (the slim-pillared Golf particularly), and their three-spoke steering wheels are neither too thick nor too thin, even if the A35’s is the chubbier. 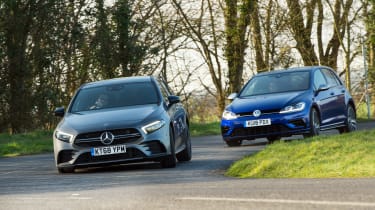 This, as is turns out, becomes a metaphor for how each feels on the road. Echoing its steering wheel, the Mercedes feels slightly larger than the Volkswagen, and its controls, from the wheel itself to the pedals and even minor switchgear, have more heft and substance to them. You might expect the Golf to exude a Teutonic solidity but in this company it feels almost delicate, taller and narrower, and much lighter in comparison to the A35 than the figures suggest.

The roads are slick from recent rainfall after a lengthy dry spell, but the A35 feels as secure as it is rapid, with little chance of either axle misbehaving and pitching you face-first or arse-backwards into a hedge. Stand on the wonderfully firm brake pedal before a corner and the nose will faithfully follow your inputs through the measured, accurate steering. Get on the power at the apex, even a little too quickly, and there’s no understeer, nor any over-rotation – just a surge of power that draws you inexorably down the following straight. In the dry it’s one of those cars that encourages you to push harder and harder to try to unearth some glinting sliver of mischief, but in the wet you welcome its sure-footedness and precision.

Corners that the A35 dispatches efficiently require more input in the Golf. Its brake pedal is softer than that of the Mercedes, but the R stands on its nose just as readily. Despite lighter steering, there’s also more feedback as you turn in, not just from the front wheels but also through the seat of your pants, and the two combine to tell you when the rear of the car is stepping out a few degrees. That’s your cue to get back on the power, and doing so will continue that angle of attack until you’re clear of the turn. 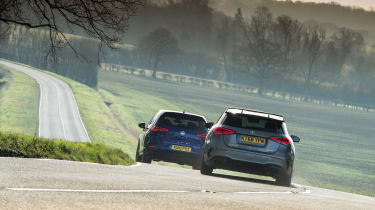 The Golf feels more agile through corner sequences too, needing less steering effort to flick from one direction to the next. Neither car feels quicker than the other, nor necessarily even more entertaining, but what the Mercedes achieves with unflappable confidence the Golf delivers with bright energy and, truth be told, the occasional moment of surprise when it gets out of shape.

Despite their similarities on paper, their engines too turn out to be quite different in reality. The A35’s 2-litre is more serious in character, with a harder edge to its tone and more focus to the way it responds. The Golf’s widely used EA888 is revvier and more eager to respond to small prods, but even the growling of the optional (£2975) Akrapovic exhaust fitted to this car can’t drown out the over-use of synthesised sound inside the cabin. Both motors are capable of giving you a similar punch in the kidneys, but for me the Golf’s free-spinning delivery feels a bit video-gamey, where the Mercedes’ engine is industrious and ready for business, delivering its final hit only if you hang on to every last rev. 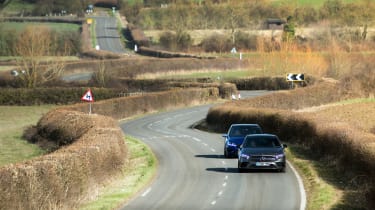 It’s more entertaining still when switched to Sport+, with the now-obligatory overrun pops and crackles and flatulent bursts between gearshifts. In some cars (including the old A45) such theatrics wear thin after a while, but because the A35 feels so demure in its other modes the contrast is quite amusing. It’s in Sport+ you get the snappiest gearshifts too (nearly on a par with the Golf’s, but the Merc’s metal paddles are more pleasurable than the plastic pucks in the R), and without the AMG Ride Control adaptive damper box ticked there’s no accompanying compromise in ride quality.

Actually, this A35 deals with broken surfaces better than any regular A-class I’ve driven, or at least plays the mental trick of being more acceptable because of its sporting bent, but the Golf still traverses the knobbliest stretches with less commotion than the AMG does. The Volkswagen just has the greater polish all-round in fact, as happy doing the duck-and-weave on a twisty road as it is slinking through town or bombing down the outside lane. The A35 can do all these things, it just does them with less alacrity and less refinement. 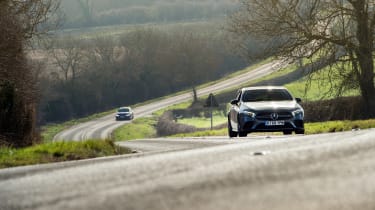 I’m going to disappoint all you Golf fans out there, because I’m giving the nod to the AMG. It may not do quite as many things as well as the Golf manages to, but it does almost everything with more sense of occasion, and by the time you’re spending thirty-five grand on a hot hatchback, that has to be factored in. If it didn’t you’d save yourself ten grand and buy a Hyundai i30 N instead, which is equally practical, barely slower and, frankly, more fun than either of these two.

The Golf R remains an accomplished all-rounder, and one of the best cars in the ‘real world’ (feel free to stop reading here if you’re one of the aforementioned Golfists) but it still doesn’t really thrill. The A35, on the other hand, is AMG’s best hot hatchback yet, worthy of comparison with the Golf. It’s not without its flaws, but imperfection has never made previous AMGs any less desirable, has it?