Mercedes-AMG’s booted A35 saloon looks a bit odd, but it doesn’t compromise the package 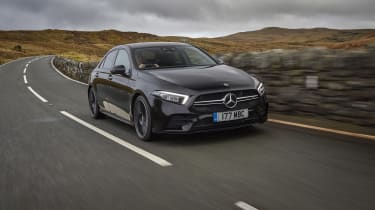 This is the Mercedes-AMG A35 Saloon, a compact booted version of the rather good A35 hatchback. It’s been designed to introduce the A-class to the US, where notchbacks are preferred, but joins both the standard hatchback, and larger CLA coupe-saloon crossbreed opening the AMG range.

The saloon differs from its hatchback sibling only with its small three-box bodyshell, which is 122mm longer and 29mm lower than the hatchback. To fit this new saloon into the range, the new CLA has grown substantially over its predecessor, so is an additional 137mm longer and 37mm wider than the saloon, while its super-sleek roofline genuinely makes it look like a miniature CLS.

The power and drivetrain that resides under the skin is familiar though, with an identical combination of engine and gearbox to that of the A35 hatchback – a turbocharged four-cylinder petrol, sending power to all-four wheels via a seven-speed dual-clutch transmission.

Power is rated at 302bhp, which is identical to that of the incoming BMW M235i Gran Coupe it will soon rival, and slightly more than the current Audi S3 saloon offers – although its replacement with an all-new model will happen later this year. 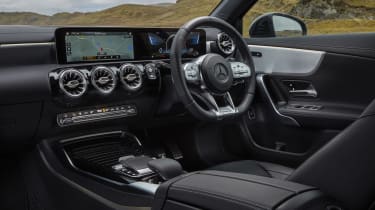 As found under the bonnet of all other 35 AMG products, the M260 2-litre turbocharged engine is based on the standard A250, rather than the bespoke AMG-built M139 from the A45 S. It was no simple exercise in turning the boost up though, rather a substantial upgrade that replaces the standard turbo with a twin-scroll item and an updated air-to-water intercooler amongst strengthened internals and upgraded breathing.

Power is rated at the aforementioned 302bhp, matching the BMW M135i, and besting the Golf R and Audi S3, while torque peaks at 295lb ft at 3000rpm. The M135i, by comparison, produces a brawnier 332lb ft at 1700rpm which plateaus further across the rev range. 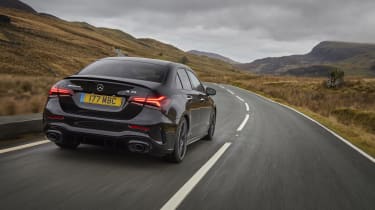 Power is sent to Merc’s 4Matic all-wheel-drive system, which is front-wheel biased, but does an admirable job supporting those front wheels in getting the power down. As with other 35 AMG models, there isn’t anything in the way of clever rear differentials or clutch packs to augment a rear-wheel-drive ‘feel’ into the handling balance – that’s the preserve of AMG’s more boisterous A45 S.

Combined with its seven-speed gearbox (not the eight-speed found in the latest GLB35 and A45), it’s no surprise that the performance figures are strong: 0-62mph takes 4.8sec (0.1sec slower than the hatchback), while top speed is limited to 155mph. 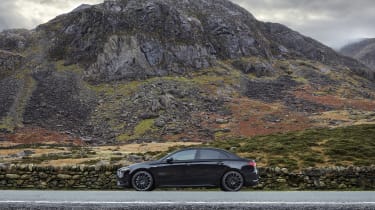 One could be forgiven for thinking its entry-level status means that the A35 Saloon is a cynical exercise in AMG logo placement, but the changes to the chassis go further than you might expect.

It may do without the broadened axles and arches of the A45 S, but the A35 does adopt bespoke geometry, with new aluminium MacPherson struts and bespoke steering knuckles – all reducing unsprung weight and adding stiffness to the front axle. Stiffness across the nose is further increased by a bespoke shear panel beneath the engine and two diagonal braces connecting the front suspension towers to the firewall.

This inherent increase in stiffness across the chassis gave engineers a better starting point to best tune each of the respective hardware inputs with more precision than in the mainstream A-class – something you can certainly feel in the A35 on a challenging road surface. 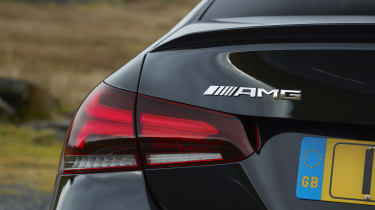 It might not come as a shock to hear that the A35 Saloon drives pretty much the same as the hatchback, which is no bad thing. The tangible feeling of a saloon chassis offering improved stiffness and noise suppression compared to a hatchback doesn’t really hold true in 2020, making the two A35s feel identical behind the wheel save for a slightly different view out from the rearview mirror.

Right from the off, the gruff four-cylinder is perhaps a little less refined than you would expect given the three-pointed star on the grille, but once inside it's quiet enough, your attention instead drawn to the glitzy interior. Pull away and it's not obvious the A35 is anything other than a standard A-class, but start delving into the (seemingly endless) driver modes via the poorly placed switch and the A35’s character changes quite dramatically, gradually sharpening the steering, throttle, transmission and, where fitted, the adaptive dampers.

The result is that in its most assertive Sport+ mode, the A35’s character is far more extroverted than rivals such as the BMW M135i or Volkswagen Golf R, and without being too contrived with steering that’s overly heavy, or dampers that are too stiff. Like all AMGs, the individual elements are able to be changed too, so where the conditions don’t suit a certain mode, you can customize them to best suit. 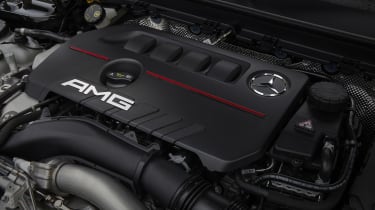 The otherwise workmanlike engine finds its voice as the volume from the induction system and cabin speakers intensify, goading you into driving harder and faster. Drive is certainly front-led, but power is transferred aft seamlessly and without any noticeable scrambling at the front wheels. Enter a corner on the brakes and the tail does lighten, but it’s never intimidating, especially with the well-judged stability systems in place.That’s not to say the A35 Saloon isn't rewarding to drive hard, but push to its limits and there isn’t a huge amount more to it – not like with its A45 S sibling or our current hot hatch favourite, the Honda Civic Type R.

The differences between AMG’s A35 saloon and hatch reside in image. The test car’s black-on-black-on-black colour scheme might have been the bane of our snapper, but it certainly helps the saloon channel a mini-E63 S vibe that could well fix one of the standard hatchback’s biggest issues: its genericness, an unfortunate result of its own commercial success.

Prices for the A35 Saloon start at £37,290, only £315 more than for the identically specified hatchback. For this entry price, the A35 is relatively well equipped with heated leather seats, LED headlights, 18-inch alloy wheels, an AMG steering wheel and Merc’s 10-inch media display paired to a small driver’s info screen. For the full-effect A-class interior, you’ll need to specify the £2500 Premium Pack that bundles the full twin 10-inch display, ambient lighting and a few other tech features.

It takes the £6000 Premium Plus Package to include all the bells and whistles though, adding a panoramic sunroof, electric seats, adaptive headlights and an upgraded Burmester sound system to the list. If there is one aspect that is misguided, it’s that the adaptive dampers are only able to be bundled into this very expensive top-tier package, meaning that for the best-driving A35 you have to stump up close to £44,000 – a lot of money for a small saloon. 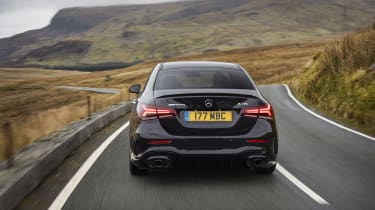 The Audi S3 Saloon is the Merc’s most obvious rival, and although its £37,770 starting price is slightly higher, it has more standard equipment and two option packs that may be less substantial, but are also far more affordable. A new model will be along soon, but the showroom appeal of the current one is still strong, with a fantastic cabin, strong engine and more cohesive design. Where the Audi falls down is with its sterile driving experience, which is less interactive than in its Golf R and Leon Cupra-platform cousins. The oddly shaped ‘fastback’ BMW M235i xDrive will soon join BMW’s range at £37,225, but we’ve yet to drive it here or abroad.

Veer towards traditional premium hot hatchbacks and you’ll also be presented with the £36,430 BMW M135i, which has near-identical power and price points to the Merc, yet despite its impressive ride quality and flexible powertrain is hardly a hot hatchback in terms of driving appeal. The A35 Saloon’s two most threatening competitors are still to come in 2020 though, with an all-new Golf R and that next-gen Audi S3 to be revealed in the coming months.